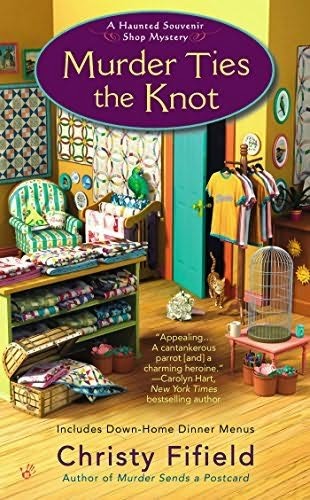 Christy Fifield is back with a new mystery in her Haunted Souvenir Shop Mysteries.

A Haunted Souvenir Shop Mystery from the author of Murder Sends a Postcard--featuring Down-Home Dinner Menus.

It’s winter in Keyhole Bay, Florida, and while the tourist trade is slow, souvenir shop owner Glory Martine is busy with her best friend’s wedding. But between managing preparations, the bride’s in-laws, and a haunted parrot named Bluebeard, Glory makes plans to catch a killer.

As her friends Karen and Riley approach their wedding day, Glory could use a break from the nuptial madness. She takes a peaceful drive to Alabama’s piney woods to pick up the wedding quilt she ordered from a supplier. But the supplier, Beth, has disappeared along with the quilt and her husband, Everett.

Glory learns that two men were found murdered near Beth and Everett’s home and that the couple is wanted for questioning. Believing they are innocent, Glory convinces them to cooperate with authorities. But when they’re thrown in jail, Glory vows to catch the real killer before one happy couple walks down the aisle and another gets sent up the river.

Check out all of Christy Fifield's books at Amazon.

Check back into our blog later this month as we will be sharing a review for Murder Ties the Knot. In the meantime, we have a chance for one lucky reader to win a copy.