Book Review: How to Catch a Cat by Rebecca M. Hale 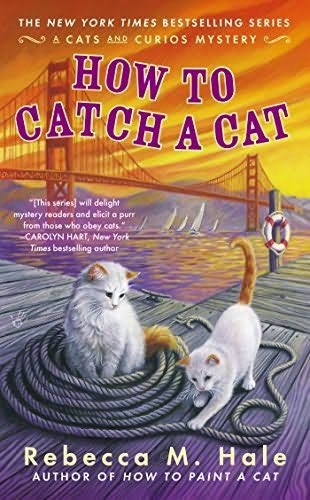 How to Catch a Cat is the sixth book in the Cats and Curios Mysteries and see's Oscar's niece preparing for America's Cup race as her role as administrative assistant for the interim Mayor of San Francisco. Meanwhile Oscar is hunting down a killer, with a penchant for killing city workers, particularly interns, with deadly knitting needles. As Oscar sold the killer the antique needles he feels guilty and is determined to hunt her down before she strikes again!

I like this series because it is a little unique and different. Oscar's niece is very rarely named, but that doesn't stop her being an integral part of each mystery, and doing her part to help solve each mystery! Of course she is "owned" by two cats, Isabella and Rupert, and they clearly steal the show as every cat is known to do!!

The mystery itself was very fascinating as being a knitter myself I found the murder weapon of choice quite disturbing, and the killer definitely re-defines the word "creepy".

Part of the mystery entails a story going back to the 1700s, aboard a Spanish ship, with two cats very similar to Isabella and Rupert. I found this part of the story very fascinating and I liked how Rebecca M. Hale brought the two stories together.

How to Catch a Cat was a splendid, thrilling mystery, in what is already a enjoyable series. I would highly recommend this series to cat lovers, as the antics of Isabella and Rupert (and their Spanish counterparts) will keep you smiling right up until the last page.

Check out How to Catch a Cat by Rebecca M Hale at Amazon.
Posted by Anna at 19:38

Email ThisBlogThis!Share to TwitterShare to FacebookShare to Pinterest
Labels: book review, how to catch a cat, rebecca m hale