Book Review: A Wee Murder in My Shop by Fran Stewart 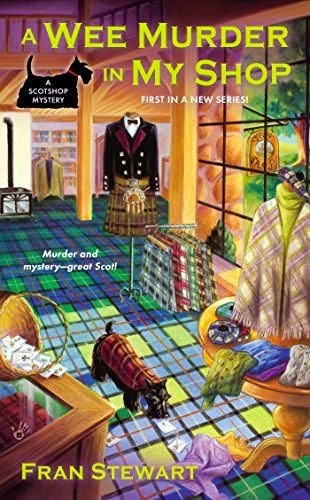 In Fran Stewart's debut series she introduces readers to Margaret "Peggy" Winn. Peggy lives in Hamelin, Vermont, a town that is like a mini Scotland in America, and owns the Scotshop, a darling little store selling Scottish items. On a trip to Scotland, to purchase more items for her store, she brings home with her an unwanted gift in the form of a 600+ year old ghost, who she names Dirk. With a ghost following her around, marveling at all the changes in the last 600 years, Peggy is determined to carry on with her life, and put the heartbreak of finding her boyfriend in bed with her best friend, behind her. However, this proves difficult when her ex-boyfriend is found dead in her shop and her cousin is accused of murder. With the help of her "wee ghostie" Peggy and her friend set out to clear her cousin's name, and try to find a murderer.

Fran Stewart has done something so incredibly right with this new series. She whisked me away to the land of Scotland right from the beginning, and the magic of Scotland carried through, even when Peggy returned back to Hamelin. Of course this was helped with the Scottish atmosphere of Hamelin, where kilts are aplenty, and of course thanks to Dirk, her wee Scottish ghostie.

Dirk is the perfect gentleman, and everything about the 21st century is a surprise to him! Peggy tries to explain to him, but of course she's talking to a ghost, so at times Dirk has to fumble along for himself, lest Peggy looks like she's talking to thin air!! Dirk was a delight, and at times I found myself copying his old Scottish account, and delighting in his every action and word!

The mystery in this debut book is very interesting, because Fran Stewart doesn't give us many suspects. With a mystery that involved hidden rooms, secrets codes and only a handful of suspects, I certainly had a hard time trying to solve it before Peggy and Dirk!

Fran Stewart's debut is a strong start to what is going to be a fabulous series. She's created very memorable characters, full of charm and mischief, and readers will be fondly recalling this adventure long after they turn the last page. If you haven't picked up this first book in the Scot Shop Mysteries yet, go grab a copy today, because it is going to be one series you don't want to miss!

Purchase A Wee Murder in My Shop by Fran Stewart at Amazon.
Posted by Anna at 06:31