Book Review: Meow If It's Murder by T.C. Lo Tempio 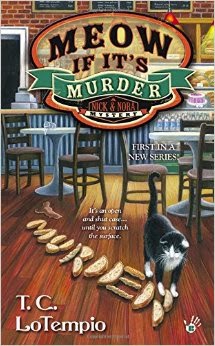 T.C. Lo Tempio's debut mystery series features one highly intelligent amateur sleuth and one adorable, and handsome dark stranger. That dark stranger would be Nick, the tuxedo cat. One day Nick walks into Nora's life, when he walks into the deli she owns. From there they have a adventure, as Nora discovers that Nick belonged to a PI that was investigating a high profile case of accident death. Lora Grainger drowned while on a ship, and the case seems open and shut but Nora's crime beat reporter intuition are rising up again and she's certain something fishy is going on. With Nick at her side she sets to investigate and find exactly what happened to Lora.

As a fan of both cats and classic mysteries I have to say there was an absolute lot to love about T.C. Lo Tempio's debut. She hits the ground running with this first series, that has both a classic and modern mystery vibe.

The reader starts by peeking in on the victim just moments before her death. Lola Grainger is aboard a boat on a business "pleasure" trip with her husband, when she suspects someone is black mailing him. These early scenes reminded me very much of Death on the Nile by Agatha Christie, with murder most foul on the seas. The classic mystery comparisons continue when we meet Nora Charles and a tuxedo named Nick walks into her life. For those that are fans of both classic mystery books and movies will remember Nora and Nick Charles from The Thin Man by Dashiell Hammett. From there T.C. LoTempio blends classic and modern together in an unforgettable mystery.

I really enjoyed the fact that Nora isn't just your regular run-of-the-mill nosy amateur sleuth trying to solve a crime. Being an ex-crime beat reporter now turned deli owner she has a natural instinct for crime, and it was enjoyable watching her use her high intelligence to solve the crime. Of course has a "lot" of help from Nick.

Nick absolutely stole the show for me. I'm the pet owner (sorry I mean, bossed around) of a tuxedo myself and I just adored Nick. While most people seem to think that the tuxedo is just a color description of a cat, I've learnt that there is definitely a personality to tuxedos and Nick personifies that greatness that is the tuxedo. Nick isn't just there to look pretty either. He helps supply Nora with clues along the way, with his handy use of scrabble tiles!!

I absolutely adored Meow If It's Murder from start to end. From both me and the felines in my house it gets five high paws, and we are excited to see what kind of adventures Nick and Nora get up to next!!

Check Out Meow If It's Murder by T.C. LoTempio on Amazon.
Posted by Anna at 07:19