Book Review: A First Date with Death by Diana Orgain 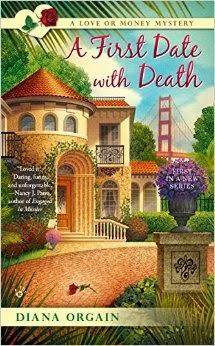 In Diana Orgain's new series she transports readers to the set of a reality tv show, as ex-cop, Georgia Thornton, nurses a broken a heart and is set to find a new love on the show "Love or Money". What Georgia doesn't bank on is being caught in the middle of a murder investigation, This is exactly what happens when one of the male contestants dies suddenly, and is replaced by her ex-fiance! Paul Sanders, the ex-fiance in question, is undercover and trying to find a killer before they strike again. Now Georgia must put her life in the hands of Paul, the one man who may be able to save her from being next, but the one man she's never been able to trust!

Diana Orgain sets the perfect tone for this first book in a new series, reeling in readers and getting them hooked on the reality tv concept. She gives the readers the view behind and in front of the camera, and it's not all glamour and roses for these reality tv stars.

Love or Money is very similar to The Bachelorette, with the twist that if Georgia guesses which men are there for the love, she wins a prize. She could walk away with money and a new love, or nothing. Of course what she isn't banking on is walking into a murder scene! The added twist with the murder kept things very interesting, as I was trying to guess who wanted to kill the contestants.

I like Georgia. She clearly doesn't want to do the show, and is more doing it as a favor to her friend, Becca, who is Assistant Producer on the show. She's comes across as a strong female lead, who, despite having many men around her, doesn't need the men to come in and save her. She kept me interested in the mystery and I was very interested in finding out more about her relationship with Paul, the undercover cop, who left her at the altar.

A First Date with Death kept me interested from the beginning to the end, and it was splendid whodunnit. Diana Orgain has created a series that readers will enjoy for a long time, and I can't wait to see where she takes Georgia in her adventure.

Check out A First Date with Death by Diana Orgain at Amazon.
Posted by Anna at 06:54