Book Review: Murder in the Middle by Diane Weiner 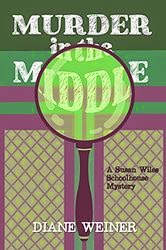 In Diane Weiner's second book in the Susan Wiles Schoolhouse Mysteries, retired music teacher Susan finds herself investigating the disappearance of the school bookkeeper, Sophie Bartolo. Despite her daughter, police detective Lynette's reluctance Susan delves into the mystery and becomes neck deep in a tangled web of clues, involving a disappearance and a very suspicious death.

There was a lot to like in Diane Weiner's first two novels, as she introduced us to the life of retired teacher Susan Wiles. I found her third adventure as enjoyable, if not more so, as Susan tries once again to track down a murderer, and keep the rest of her life together.

Diane Weiner throws the reader right into the mystery, with the disappearance occurring within the first few pages. I love when an author does this, as I find a slow lead-up to the mystery can quite often bring about boredom and a reluctance to continue with a story. Never fear of getting bored with this one, from the first action packed pages to the end, Murder in the Middle kept me on the edge of my seat as I tried to solve it alongside Susan.

Part of what will keep readers coming back to this series is Susan herself. She's vividly written, as she tries to to solve the mystery and deal with real issues as well. Diane Weiner doesn't gloss over the life of a retired teacher, and Susan comes across as a real person.

I had a splendid time reading Murder in the Middle. It has a Murder She Wrote vibe to it, and as a long time fan of the show this is certainly a good thing. If you're looking for a good mystery series with a mature amateur sleuth, I strongly recommend this series.

Check out Murder in the Middle by Diane Weiner at Amazon.
Posted by Anna at 11:36