Book Review: A Bird in the Hand by Dane McCaslin 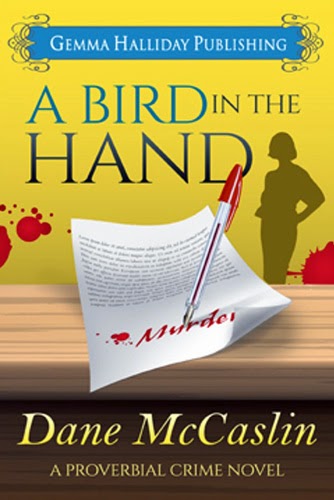 Have you ever wondered what it would be like for a mystery writer to solve an actual crime? Do you think mystery writers would be nosy and throw themselves head first into a murder mystery, right in their town? Well Dane McCaslin answers that with a resounding "yes!" in her new book, A Bird in the Hand.

In Dane McCaslin's debut series, readers get to dive into the world of a mystery writer that finds herself right in the middle of a real-life crime! Caro Layton-Browning and her husband, Greg, are British ex-Pats, navigating life in New York. When they stumble across a body in the park it spikes Caro's curiosity. Soon another dead body is discovered, that of a fellow resident in picturesque Seneca Meadows, and Caro and Greg get investigating, determined to find a killer before he strikes again.

Plain and simple, Caro is awesome! Right from the first page, I found myself enjoying Caro's "quirks" as she spies on her neighbors, and rallies against her neighbor, the "Cat Lady", who she accuses of allowing her cats to use Caro's yard as a giant litter box. She has adorable quirks, like not wanting to walk in the rain!, and did I mention she's nosy? I loved that about her.

Caro is determined to unravel this mystery, and she pulls her husband, Greg, right into the mystery too!!  In Caro and Greg, Dane McCasslin has created a happily married couple, that work together to solve the crime. In many ways Caro and Greg remind me of Tommy and Tuppence from the series written by Agatha Christie, and they were truly as enjoyable to read and spend time with, as Tommy and Tuppence are.

With a gang of ecclectic and unforgettable characters, A Bird in the Hand is a fast-paced mystery that will have you turning the pages faster and faster, trying to solve the mystery alongside Caro and Greg. I soaked up this mystery, like a caffeine addict that hasn't had a cup of coffee for a week!, and I'm eager to find out what kind of fun and adventure Caro and Greg will get up to next!

Check out A Bird in the Hand by Dane McCasslin at Amazon.
Posted by Anna at 06:49

Email ThisBlogThis!Share to TwitterShare to FacebookShare to Pinterest
Labels: a bird in the hand, book review, dane mccaslin