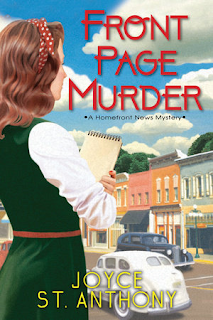 In this World War II-era historical mystery series debut by Joyce St. Anthony, small-town editor Irene Ingram has a nose for news and an eye for clues.Irene Ingram has written for her father’s newspaper, the Progress Herald, ever since she could grasp a pencil. Now she’s editor in chief, which doesn’t sit well with the men in the newsroom. But proving her journalistic bona fides is the least of Irene’s worries when crime reporter Moe Bauer, on the heels of a hot tip, turns up dead at the foot of his cellar stairs.An accident? That’s what Police Chief Walt Turner thinks, and Irene is inclined to agree until she finds the note Moe discreetly left on her desk. He was on to a big story, he wrote. The robbery she’d assigned him to cover at Markowicz Hardware turned out to be something far more devious. A Jewish store owner in a small, provincial town, Sam Markowicz received a terrifying message from a stranger. Moe suspected that Sam is being threatened not only for who he is…but for what he knows.Tenacious Irene senses there’s more to the Markowicz story, which she is all but certain led to Moe’s murder. When she’s not filling up column inches with the usual small-town fare—locals in uniform, victory gardens, and scrap drives—she and her best friend, scrappy secretary Peggy Reardon, search for clues. If they can find the killer, it’ll be a scoop to stop the presses. But if they can’t, Irene and Peggy may face an all-too-literal deadline.  (Summary via Goodreads)

Front Page Murder is the first book in the Homefront News Mystery series by Joyce St. Anthony and it sets the stage beautifully for readers.

In Front Page Murders the story is set in the early 1940's after Pearl Harbor was attacked and America went to join the war.  Main character Irene Ingram is hit hard when American's started going to help fight the war when her fiance Bill, who was a police officer and her father who ran the local newspaper, the Progess Herald went to help fight in the war.  Her father went as a correspondent to cover the war and Bill went to do whatever he was assigned.  With her father leaving he puts Irene in charge of the newspaper making her the editor in chief.  Seeing as everyone is doing what they can to help out with the changes, Irene takes her job quite seriously......even if some of the male employees think othewise.

Unfortunately before Irene can get use to all the changes one of her reporters, Moe, doesn't show up for work and no one knows where he is.  She learns that he didn't go out to cover the story she assigned him so she has to do it herself.  She eventually goes to Moe's house to find out what is going on and finds him dead at the bottom of his cellar stairs.  Her future father-in-law just happens to be the Chief of Police and when he checks out the scene, he determines it to be an accident.  Shortly after Irene comes across something in Moe's desk that suggests that it wasn't an accident.  This leads Irene down a dark path that no one could have imagined.

And when some other things happen around town and at a local factory that is building parts for the war, Irene doesn't know what to think.  Then when she finds out the woman her mother has recently allow to board at their house is keeping a big secret, Irene is more confused than ever !!

Readers will love this story !!  It is always a nice change to read stories set back in time when things were much easier and technology wasn't as big as it is nowadays.  It is always interesting to read about how things were done back then and especially how a crime was investigated and solved.  And readers will enjoy the story that St. Anthony has written.....she will have you turning pages as fast as your eyes can read the words.

I highly recommend reading Front Page Murder and I personally cannot wait until the next book to see where the story will take Irene......