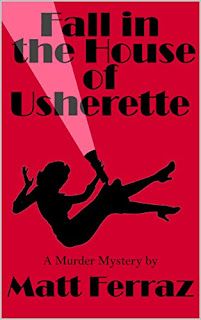 Over a hundred witnesses. They all saw who pulled the trigger … but nobody knows who the murderer is.Colorado, 1961. T. T. Tottenham is a third-rate horror filmmaker who uses theatrical gimmicks to make each screening a unique experience. Katrina Stevens, chief usherette and owner of the Palladium Film Theater, decides to hire Tottenham when ticket sales are low. Tottenham arrives at the little town of Emberview with his partner Sidney Masters and promises to save Katrina’s business.Then one of Tottenham’s tricks goes wrong, leaving a dead body in the aisle in the middle of a movie. A murder hadn’t been enough to close down the Palladium three years ago, but will it be this time? Once again Katrina has to solve a mystery to keep her beloved film theater open.  (Summary via Amazon)

In Fall in the House of Usherette readers are hanging out at the Palladium Film Theater with owner and usherette Katrina Stevens.  The year is 1961 and Katrina is trying with all her might to keep the theater open but sales are down and she doesn't know what to do.  Luckily her boyfriend Alex is there to help.  He read an article about a man T. T. Tottenham who travels around and goes to movie theaters and shows horror movies and has some gimmicks and tricks up his sleeve to entertain the audience.  Katrina reaches out to Tottenham and hires him to come to town and help her save the theater.

Unfortunately during one of the movies a stunt involving Alex goes very wrong and Tottenham is shot dead !!  As if things couldn't get any worse for Alex and Katrina but they do.....when the deceased is fingerprinted and identified, they learn that it isn't Tottenham but his assistant Sydney Masters.  And to add more confusion to the situation the person they thought was Sydney is missing !!!

Katrina takes it upon herself to look into the murder to save her business as well as prove Alex's innocence.  Luckily Katrina knows Detective Stockwell from the previous owner's murder so working with him won't be difficult.

Readers will love Fall in the House of Usherette !!!  Once you start reading you will find it very difficult to stop reading until you get to the end.  And when things start to get dicey, you will want to continue reading so that you can find out what is going on in Emberview Colorado.....  Ferraz will take the readers on a very twisty rollercoaster ride that you will not want to get off of.