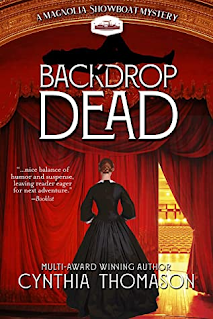 In 1898, librarian Gwen Barlow's life is predictable, if not adventurous. That changes when her mother's eccentric brother bequeaths the family the Magnolia Palace, a shiny new showboat complete with actors, crew, and a mountain of debt. Gwen, her mother, and younger brother leave Apple Creek, Ohio, for the "sinful center of America," the Mississippi River, where Gwen assumes management of their inheritance complete with temperamental actors, a river town of quirky characters and a sheriff who insists the former owner of the showboat, Eli Willoughby, was murdered. The culprit must be found before Gwen and her troupe can leave Hickory Bend, Missouri, and turn the showboat into a profit-making venture. She first must find a captain for the ill-fated riverboat. She trusts her intuition and hires handsome Carson Stockwell who comes with a vast knowledge of the river and a reputation that makes her question her decision. Determined to find the murderer and save her showboat family, Gwen embarks on a journey of discovery that proves more suspenseful than the Magnolia's own melodrama.  (Summary via Goodreads)

Backdrop Dead is the first book in the Magnolia Showboat Mystery series by Cynthia Thomason and readers will fall in love !!

Backdrop Dead is set in 1898, a much simpler time but there is nothing simple for main character Gwen Barlow.  Gwen, along with her mother and brother, lives in Apple Creek, Ohio.  Gwen is a librarian and quite enjoys her job.  Everything changes when a lawyer from Hickory Bend, Missouri visits her mother and informs her that her recently deceased brother, Eli, has left her everything he owns....which is a magnificient showboat that he had built and planned to travel along the Mississippi River entertaining towns along the way.  So Gwen, her mother and her brother Preston pack up and head to Hickory Bend to see what awaits them on the showboat.....Eli's Magnolia Palace.

Upon arrival to Eli's Magnolia Palace they find out that not only did they inherit the boat but there are workers and actors on board waiting to see what will become of them.  Gwen also soon learns that no one has been paid in weeks and there is hardly any food left to feed everyone.  And to make matters worst, the local law, Constable O'Toole rules Eli's death murder and insists that the Magnolia Palace stay right where it is until his murder is solved.

Gwen takes it upon herself to look into Uncle Eli's death as she gets to know the people who Uncle Eli hired to run and perform on the showboat.  Unfortunately as she gets to know everyone including some of the townfolk, her list of suspects grows.  As she continues to investigate something else happens that adds to Gwen's troubles.

Readers will love everything about Backdrop Dead.  Reading a story set back in time when crimes where solved completely differently than modern times, especially without technology, is an interesting change for readers.  Readers will fall in love with Gwen, her family and everyone aboard the showboat and the storyline of running a showboat on the Mississippi River will entertain readers from the moment you begin reading.  I thoroughly enjoyed Backdrop Dead and look forward to what Thomason does in the next book.