Murder Returns to the Precipice by Penny Goetjen 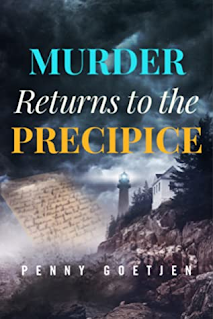 Granddaughter of the inn’s matriarch, Elizabeth Pennington saw to every intricate detail in the renovation of the popular seaside destination after a deadly hurricane nearly destroyed it. When the body of a female guest is discovered in the newly opened fitness center, it appears to be a tragic accident that threatens to taint the grand reopening. But as police investigate, it becomes painfully clear it’s something more sinister. Is there a killer in their midst? Has the inn’s dark past resurfaced?See why critics and readers alike are raving about the suspense novels of multi national award-winning storyteller Penny Goetjen. “An endlessly delightful tale and band of characters...”--Kirkus Reviews “A richly textured mystery that’s both charmingly atmospheric and cunningly staged. Be forewarned: Like the coastal waters of Maine, this story will lull you in with its seeming tranquility only to sweep you away in the undercurrent….” --John Valeri, Criminal ElementWINNER in the Indie Excellence Book Awards for Regional Fiction: Northeast.  (Summary via Goodreads)
Murder Returns to the Precipice by Penny Goetjen is the third book in her Precipice series and having read the previous two I felt like I was returning home for a visit.  I fell in love with Elizabeth Pennington and everything surrounding her life....except maybe the number of dead bodies she comes across.  And when you begin reading Murder Returns to the Precipice you don't have to read past the first page before the first dead body is found.....
Elizabeth grew up at the Pennington Point Inn in Maine with her grandmother but when a hurricane hit and she lost her grandmother, she walked away and went back to Conneticut and her work as an interior designer.  But a few years later she returns to the inn and begins renovations to reopen it up.  Luckily for Elizabeth her boyfriend Kurt has moved there with her to help run the inn leaving his work with the FBI.  Unfortunately shortly after reopening the inn, Elizabeth finds a guest dead in the new fitness room, she learns that she failed to pay past taxes and the inn may be heading to foreclosure, her ex-friend Rashelle returns, she gets a disturbing letter regarding Kurt and a possible fiance and she gets a clue to what becomes a scavenger hunt form an old friend of her grandmother's.
To say Elizabeth has a lot on her plate is stating the obvious but there is nothing that she cannot face and overcome so she bears down and gets to work......
Readers will love the books in this series because the storyline is so addicting and the people are lovable...even when they shouldn't be.  The setting of the story will explode in the readers mind and you will not want to leave.  I have such a vivid picture of the inn and it's surrounding areas along with the people that they feel so real....even if it is all in my head.  Goetjen has such a unique talent in her story telling that you will be a fan instantly !!
Review by Missi M.