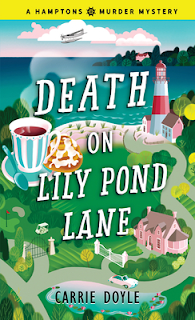 Another murder in the Hamptons, from a New York Times bestselling author Carrie Doyle.

Springtime in the Hamptons comes late, but it's worth it! Brisk walks on the bright chilly beach, cinnamon buns at tea time, blooming forsythia and...murder?

East Hampton innkeeper and chef Antonia Bingham has settled in to town and taken on extra work as an estate manager, giving her entree her into some of the area's most glamorous homes. Once inside, Antonia checks the heat, looks for leaks or damage, and finds the occasional dead body. Since the police can't be trusted, it's up to Antonia--a modern day Miss Marple, with an overly enthusiastic adoration of carbs and a kamikaze love-life--to put her skills of deduction to use.

Agatha Christie and Louise Penny fans should nestle in with a steaming mug of their favorite tea and get ready to peek behind the gates of the mansions of the Hamptons, as Antonia Bingham solves another shocking and devastating murder in Death on Lily Pond Lane, the second book in New York Times and USA Todaybest-selling author Carrie Doyle's Hamptons Murder Mystery series.

The Hamptons are known for beautiful beaches, luxurious living, millionaire mansions, and now...murder .  (Summary via Goodreads)

I became a fan of the Hamptons Murder Mystery series by Carrie Doyle when I read the first book in this series, Death on Windmill Way and Doyle obtained a fan for life after I completed the second book, Death on Lily Pond Lane.

Antonia Bingham is a very busy person, she owns The Windmill Inn which is an inn and a restaurant but in Death on Lily Pond Lane she has also taken on the job of estate manager.  She has a few houses on Lily Pond Lane that she checks a few times a week and is there for delivers as the owners of these beautiful massive mansions are only in the Hamptons a few months, usually in the summer.

While Antonia is checking the Masterson's house after a friend of their son Luke's was staying there doing some work, she finds out that Warner didn't leave the day before as planned.  Unfortunately when Antonia goes looking for him to ask him why he has extended his visit, she finds him dead in a bathroom.  It appears that Warner fell and died as a result of an accident but Antonia is not convinced.

Antonia begins looking into what Warner was working on and finds out that it was a documentary exposing some down and dirty secrets of some of the wealthy residents of the East Hamptons.  While Antonia tries to organize a suspect list and narrow it down, there is another death and this time it is definitely murder !!

Readers will be on the edge of their seats while they get lost in Death on Lily Pond Lane.  You will be powerless to stop reading.....you will have to know what is going on and try to help Antonia solve these murders.

I thoroughly enjoy reading this series and love that Antonia keeps away from the police because she has a bad past with them so she keeps away from them at all costs.  In this series it is just Antonia, with the help of her father figure Joseph, working out the clues and finding out who the killer is and then allowing the police to get involved.  This is a unique approach to cozies and one that I believe readers will enjoy.  I know I have enjoyed these fist two books in the series and cannot wait another minute to start the third book, Death on West End Road.  I encourage you to get your copies and catch up !!