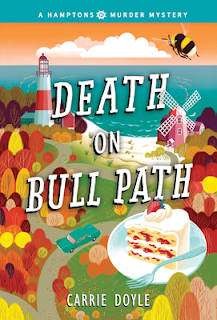 After the craziness of August, the end of summer is supposed to bring peace and tranquility to the posh seaside enclave of East Hampton, New York. Antonia Bingham, chef and proprietor of the town’s prestigious Windmill Inn, has been lining up new recipes to try in the quiet, golden days of September, and looks forward to putting murder and mayhem behind her so she can focus on herself and her business. But when a Labor Day visit by two slick Wall Streeters ends with their gruesome deaths in a summer rental house, Antonia is pulled back to the dark side. With mysterious guests (and possible suspects) popping in and out of the inn, Antonia has no choice but to put back on her sleuthing cap and try to decipher who butchered these men. Wading through social media, the local nightclub scene, share houses, and other unfamiliar haunts of the young and glamorous is an eye-opener for Antonia—and a major time commitment. And the timing couldn't be worse, because Nick Darrow, Antonia’s movie star crush, is back in town, available and ready for a commitment...while Antonia’s sinister ex-husband is making his presence known in her life again, too. The high season may be over but Antonia has never been busier, juggling work and crime—and fighting for her own life, too.  (Summary via Goodreads)

I am so glad that I took the time to read the Hamptons Murder Mystery series books by Carrie Doyle back to back.  I felt like I was on a continuous trip with my friends and we had a great and exciting time with a few murders in the mix.

Death on Bull Path is the fourth book in the series and by now we know that the main character Antonia Bingham is a very smart and busy person.  However, no matter how busy she is, she always makes time to help out when there is a murder.  Antonia left California and moved to the Hamptons and bought the Windmill Inn which is an inn and restaurant.  She loves being in the kitchen making amazing food for the people that come to eat at the inn but she cannot help but get drawn into the mystery surrounding a murder case.  This may stem from being married to a police officer back in California....even though he was a very abusive and controlling person that even though they are divorced and she moved far away, he still gets under her skin.

In Death on Bull Path Antonia gets involved in a double murder case when she learns that the two gentlemen that were killed had been in the bar hours before being murdered.  And, of course, she gets pulled in deeper by her partner in crime, Larry Lipper.  Larry is actually the crime reporter for the local paper and he thinks that Antonia needs him to solve the cases where she doesn't seem to really need anyone's help.

While Antonia and Larry are looking into the double murders, Antonia finds out that her ex-husband, Phillip, is in town and was in the inn.... just when her friendship with actor Nick Darrow might be moving forward.

Readers cannot help but fall in love with this series and all the little stories that are continuous throughout the books and all the new murders that occur with each new book.  Readers will love to see Antonia and the inn succeeding and see how she handles every aspect of her life.  Readers will love the level of danger and the relationships among Antonia and the people in her life.  Readers will definitley want to pack a bag and hop in the car and head to the Windmill Inn and rent a room for a while.  Luckily we can return there with the first four books in the series and keep an eye out for the next book to be released and we don't have to worry about what to pack and all we have to do is go to our comfy seat with a snack and get taken away......