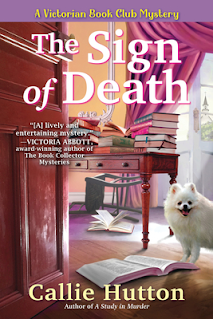 USA Today bestselling author Callie Hutton returns with her second Victorian Book Club mystery, in which Lady Amy and Lord William sleuth the death of a teetotaler who took a fatal dunk in the drink. Bath, England, 1891. Mr. James Harding was a lot of things--businessman, well-to-do, probable scoundrel--but a drinker he most assuredly was not. So when Harding is believed to have drunkenly fallen to his death into the icy River Avon, Lord William Wethington is immediately suspicious. Finding Lord William's name on a letter in the victim's pocket, the local constabulary summons William to identify the victim. Police detectives learn that William had been one of Harding's business clients--and undoubtedly not the only client the dead man had cheated. William entreats Lady Amy Lovell, a fellow member of the Mystery Book Club of Bath, to help him deduce what really happened to the late Mr. Harding. Lady Amy, a celebrated mystery author herself, once called on William to help her solve a real-life mystery, and now she fully intends to return the favor. But it won't be easy. Practically every one of Harding's many clients had ample reason to want to do him in. And there's precious little time to narrow down the list: William and Amy soon become prime suspects themselves when the police discover them ruffling through files in Harding's house. Lady Amy will have to be as clever as her characters if she's to save William from the gallows...and herself from Harding's real killer.   (Summary via Goodreads)

I love reading mystery books set back in time....a time when they didn't have computers or DNA or anything that makes solving crimes technical.  I enjoy reading how the police, detectives and the innocent parties being charged go about solving the murder.  And Callie Hutton knows how to keep the readers attention from the first page until the very last word in her Victorian Book Club Mystery series.

The Sign of Death is the second book in this series and main character Lord William finds out that his man of business, James Harding, is found dead in the river with his business card on him.  William tries to explain to the two detectives that he had nothing to do with the death but they do not believe him.  And after looking into things it is discovered that the deceased had forged William's name on investment documents and it appears that he was stealing from William.  William also soon learns that there is a list of people who Harding was either stealing from or blackmailing....

Knowing that there are more likely candidates for committing the crime William with the help of a close friend, Lady Amy, decide to look into his death when the detectives determine that William is their main suspect.

The Sign of Death is more than just a cozy mystery..... While William and Amy are going around town trying to decreetly learn more about James and his life, they find that he wasn't a very nice guy and was blackmailing some people in town and a few of them belong to the book club that William and Amy attend every week.  Readers will also follow along with the story of Amy being a published mystery author under a different name, a name that people assume is a male.  And Amy has been keeping this secret because her father does not want people to know what she is doing.  Also in The Sign of Death William's mother decides to move in with him and Amy has to deal with her father and brother coming to stay with her for a whie due to business they have in town.  And Amy and her father are having some trouble with the publishing company that handles her books because they want her to attend a book fair at the same bookstore she attends her weekely book club meetings.

With everything going on readers cannot help but be drawn to the story to see how everything unfolds.  And boy oh boy when you get to the end, you will be flappergasted at the turn of events !!!  The way that Hutton orchestrates things is magical and I'm sure this series will be one that you will want to keep your eyes open for the next book so that you can return to see what trouble William and Amy can get into ......