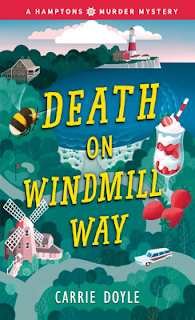 Murder in the Hamptons, from a New York Times bestselling author Carrie Doyle.Cozy mystery fans and lovers of Louise Penny, Agatha Christie and Alexander McCall Smith should prepare a hearty snack and snuggle in for this compelling page-turner by best-selling author Carrie Doyle. Mouth-watering food descriptions, nail-biting scenes of suspense, a winning heroine, and a captivating cast of characters pack the launch of this series, one that's sure to entertain readers for years to come.The Hamptons are known for beautiful beaches, luxurious living, millionaire mansions, and now...murder! Antonia Bingham, a renowned chef and the new owner of East Hampton's Windmill Inn, escaped to the Hamptons to get away from a harrowing past. Yet now she finds herself in more danger than ever when she discovers the inn's previous owners may have been the victims of murder. Will her overly inquisitive personality be her downfall as she digs up secrets in her attempt to solve the crime?The Hamptons are known for beautiful beaches, luxurious living, millionaire mansions, and now...murder!  (Summary via Goodreads)
Death on Windmill Way by Carrie Doyle is the first book in the Hamptons Murder Mystery series and it sets the stage beautifully !!
In Death on Windmill Way main character Antonia Bingham buys the Windmill Inn after the previous owner dies.  Antonia moves from California to the Hamptons in New York after her best friend Genevieve convinces her to buy the inn.  So Antonia moves and spends a lot of money redoing the inn and upgrading the kitchen so that it can also have a restaurant in it.
After the inn has been open for a few months Antonia learns that the previous owner, Gordon, may not have had a heart attack like people believed but that he was murdered and then when Biddy, another previous owner is found dead in her home, Antonia starts to wonder if she is doomed.
Antonia knows that she should be focusing on running the restaurant and inn but she cannot seem to get the deaths off her mind.  With the help of Joseph, one of her regular customers who she looks up to as a father figure, they do their own investigating.  Unfortunately there are a lot of people on the list....Gordon's sister, Gordon's girlfriend, a few employees he fired all have reasons to want to get rid of Gordon.  But finding out a common denominator in Biddy's death may not be so easy........
Death on Windmill Way will grab the reader's attention immediately and you will not be able to stop until you get to the end.  One thing readers will enjoy about this book is that the police are no where on the radar.  Because Gordon's death waas ruled a heart attack there is no open murder case to investigate.  The fact that Antonia does all of the investigating without getting in the police's way is a pleasant change from other cozy mystery stories where the main character and the police collide constantly.  And the way that Doyle writes the story will have the reader m=not even missing the police at all.
I highly recommend reading Death on Windmill Way and I for one cannot wait to dig into Death on Lily Pond Lane to see what happens next in this little quiet town......
Review by Missi M.