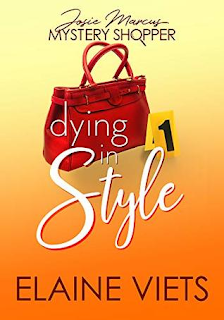 Suburban single mom, Josie Marcus, loves being a secret shopper. But when she’s framed for the murder of a famous handbag designer, Josie discovers that secret sleuth might be a better fit…Josie’s excited about her latest assignment: mystery shopping the stores of St. Louis’s premier handbag designer, Danessa Celedine. A stunning socialite who frequently makes headlines with her hot Russian lover, Serge, Danessa sells exquisite purses to the rich and famous for a small fortune. Unfortunately, the Celedine shops aren’t nearly as dazzling as their clientele and Josie’s negative report could kill a lucrative deal to sell the handbag empire. Danessa swears it will also cost Josie her career.

Businesses often live and die by Josie’s reviews, but when Danessa and Serge are found murdered, she’s suddenly linked to an actual homicide…as the chief suspect! Now, Josie will need all her secret shopper subterfuge to investigate the crimes, clear her name, and stop the killer from claiming another fashion victim.   (Summary via Goodreads)
Dying in Style is the first book in the Josie Marcus Mystery Shopper Mystery series by Elaine Viets and it sets the stage nicely for the series.  Main character Josie Marcus is a single mom to her 9 year-old daughter Amelia but she has a lot of help from her mother, Jane.  The three live is a duplex with Jane living above Josie and Amelia.  Josie's job as a mystery shopper allows her to work around her schedule mostly so that she can be there for her daughter.  Josie feels that she does a great job being fair to the places and the people that she is looking into until one job threatens everything !!
Josie is given the assignment to shop at three of the Danessa shops in three different malls.  This is a high end accessory store featuring very expensive purses made by a high profile member of society, Danessa Celedine.  Danessa is known for her purses as well as her donations to charities all over the St. Louis area.  She is also in the spotlight a lot because of her relationship with a Russian God by the name of Serge.  After Josie visits the three stores, she finds that none of them hold up to the high standard that they should and Danessa is in the middle of a deal to sell them for $50 million.  She warns her boss Harry before she sends in the reports that they are not good but he encourages her to send them as is.  The next day Josie is called into the office and confronted by Danessa herself.  Danessa claims that the reports are incorrect and wants them changed but Josie won't do it which leads to a heated argument with threats made.
Before Josie can get another assignment Danessa and Serge are found dead....Serge at the house they shared and Danessa at one of the stores that Josie visited.  When her fingerprints are found at the store, the detectives in charge of the case do not believe her story.  Josie, with the help of her best friend, Alyce, decides she needs to find out who killed the power couple before her daughter loses her mom to jail.
I am a huge fan of Elaine Viets and I LOVED her Dead-End Job Mystery series and after reading this first book in this series, I am sure that I will be thoroughly engrossed in it.  Viets know how to put words to paper attracting readers and you cannot help but fall for the characters and want to see them get out of the messes they get into.
Review by Missi M.