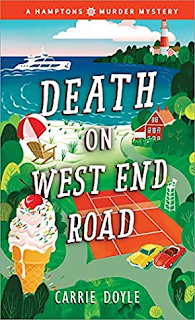 Like a basket of warm cinnamon buns, an unsolved crime is something that Hamptons innkeeper and sleuth Antonia Bingham just can't resist. Despite a busy high-season schedule and an inn booked to capacity, Antonia has agreed to investigate a cold case in her beloved adopted hometown, East Hampton, NY: the killing of Susie Whitaker, whose brutal 1990 slaying on a tennis court in the poshest part of town was never solved. And the person who has hired Antonia? Prime suspect Pauline Framingham, a manipulative pharmaceutical heiress from a powerful family. As Antonia attempts to unravel the mysteries of the past she unearths even darker secrets and ultimately wonders if it would have been best to let sleeping dogs lie. To make matters worse, past acquaintances and love interests reappear in the Hamptons, disrupting Antonia's world and causing her to scurry to the fridge for comfort. Death on West End Road is the third book in the Hamptons Murder Mystery Series. Along with a colorful cast of supporting characters, the beating heart of the book is Antonia Bingham, restaurateur, gourmand, and nosy carb-lover.  (Summary via Goodreads)
Death on West End Road by Carrie Doyle is the third book in the Hamptons Murder Mystery series and I have to say I think this one is my favorite.....so far.  I am taking the time to read all four of the books that have been written in this series in order back to back and I just love the series for a number of reasons.
The Hamptons Murder Mystery series has one very unique difference from other cozy mysteries.  This difference really makes the series stand out.  The difference is that the police or detectives are not a main aspect.  The main character tries to stay as far away from them as possible .... and I tthink she does a very good job of it.
Main character Antonia Bingham owns the Windmill Inn in the East Hamptons in New York.  The inn consists of a restaurant and rooms to rent.  Antonia lives in a small apartment, her friend and father figure Joseph lives in a second apartment upstairs and the two of them seem to get roped into solving murders.  Okay Antonia more than Joseph but he gets involved by doing research and being Antonia's sounding board.
In Death on West End Road Antonia is approached by Pauline Framingham to look into a cold case.  Pauline is from a powerful family in town and when she was a teenager one of her closest friends was murdered on the family's tennis court and the case has never been solved.  Most people back then believed that Pauline murdered her friend Susie and the family paid to have it covered up.  But Pauline insists that she is innocent and wants Antonia to finally solve the case and bring closure to everyone involved.  Unfortunately Antonia learns that Pauline has lied about quite a lot of things and finds it hard to not think of her as the killer.
Antonia with the help of Joseph and Larry Lipper, the crime reporter for the local newspaper, decides to look into Susie's case and begin to interview everyone that was a part of the group of friends back then.  They soon learn that everyone is still afraid of Pauline and are not completely honest with Antonia.
When people start leaving town and a restraining order is about to placed on Antonia for interferring, Antonia decides to stop investigating and put all her energy into the inn where it should be.  But something keeps pulling her into Susie's case........
Death on West End Road is a remarkable story to read.  Readers are drawn into the story immediately and will also want to see justice for Susie.  Reading about a cold case is always an interesting read and seeing the case in fresh eyes always helps and Antonia is relentless is getting the killer and bringing justice to those who need it.  I was hooked as soon as I started reading the first book in this series, Death on Windmill Way and cannot wait to dig into Death on Bull Path......
Review by Missi M.