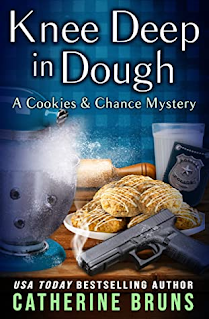 From USA Today bestselling author Catherine Bruns comes a hilariously homicidal Cookies & Chance mystery!For once, baker Sally Muccio’s life isn’t a recipe for disaster. She’s happy to be out celebrating her wedding anniversary... that is until she spies her friend Officer Brian Jenkins with a gorgeous blonde who is not his newlywed wife. The woman's name is Kelsey Sherman, and it turns out she once dated Brian. Which doesn't make Sal feel any better about the situation, but she decides to mind her own business and enjoy her evening.Only before the night is over Kelsey is dead from a gunshot wound, and Brian is found standing over her body. To make matters worse, the bullet is confirmed to have come from his own gun. Brian swears he had nothing to do with the murder, and Sal believes him, even if the rest of the town’s convinced that he’s a total crumb. With nowhere else to turn, Brian asks for help to prove his innocence. But when the tables turn and someone tries to kill Sal as well, she might come out of this mess battered for life.*Recipes Included!*  (Summary via Goodreads)
I am like a kid on Christmas Eve when it comes to the Cookies & Chance Mystery series by Catherine Bruns.  I just love EVERYTHING about this series and with Knee Deep in Dough being the tenth book in this series, there is a lot to love !!  With every new book readers will want to dive into the book and be a part of the Muccio / Donovan families.....
In Knee Deep in Dough, as in all of the book in this series, there is a lot going on....but no matter how much main character Sally Muccio Donovan can handle it.
Sally and her husband Mike are celebrating their third wedding anniversary with Josie, her best friend and partner in the bake shop, Sally's Samples, and Josie's husband.  While out at a local bar Ralph's, Sally runs into an old friend Kelsey who is back in town for her sister Felicia's wedding.  Sally also runs into her good friend police officer Brian and learns that Kelsey and Brian have a history.  Unfortunately before she can learn more about this history Kelsey is shot to death behind the bar and Brian's gun is the weapon used.  Brian insists that he left his gun under his seat in his truck but doesn't remember locking the doors.
Everyone wants Sally to stay away from the murder investigation and concentrate on the bakery, her daughter Cookie and Mike.  But with Brian suspended from the force and his partner taken off the case, Brian looks to Sally to just talk to people of interest.  Sally cannot say no because Brian saved her life and she feels she owes it to him and to Kelsey to find the real killer.
Readers cannot help but fall in love with this series !!  You will want to be a part of the family when they all sit around Sally's parents dining room table eating the amazing food that Grandma Rosa has made.  You will love the relationships throughout the story....from Sally and Mike's love story to Sally and Josie's friendship to the way Grandma Rosa always knows what to say even if she messes up a word or two and even the wacky relationships of Sally's crazy parents is something to love.  You will be inspired by Sally's parents for their love for each other and their family as well as their zest for life and you cannot help but chuckle at Domenic's work ethics and Maria's flair for fashion.  You will want Grandma Rosa to be your grandmother as well.  Who am I kidding ? You will want it ALL !!!
The last line in Knee Deep in Dough says it all (and I can say it because it doesn't give anything away).... "I will say this, Sal.  Life is never dull with you and your family."  Life is never dull with Sally especially when you throw a dead body or two in the mix and you will be unable to put any of the books in the Cookies & Chance Mystery series down until you've read the very last word.
Review by Missi M.
***************************************
To learn more about Catherine and her books, go to her website at :
https://www.catherinebruns.net/
If you sign up for her newsletter you will always know what is going on with her and all her books and you will receive the free download of her short story Formals, Fortune Cookies & Fraud. 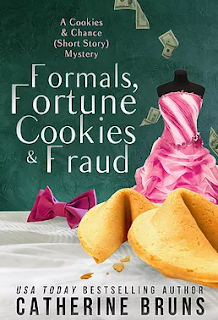 Sally Muccio's eagerly been awaiting her senior prom, but the fateful evening proves that things don't always turn out the way you planned. An argument with her boyfriend and some stolen money send Sal and her best friend Josie searching for answers, but they come up with danger instead.

When you read the books in the Cookies & Chance Mystery series, like a lot of series, things are repeated.  Sally and Mike were high school sweethearts who unfortunately broke up the night of the senior prom due to a misunderstanding.  This misunderstanding led to them going their separate ways for years.  Luckily some years later they were able to discuss their prom night and the things that led to their break up and they got back together.  Lucky for them and for the devoted readers of this series.

I cannot stress it enough that you should read all of the books in the Cookies & Chance Mystery series as well as the other books written by Catherine Bruns.  You will thank me for it !!