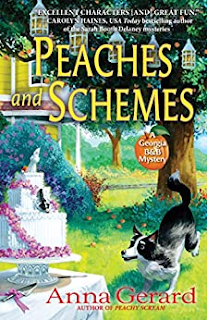 In Anna Gerard's third delightful Georgia B&B mystery, Nina Fleet learns that despite the satin, lace, and buttercream trappings, weddings often prove to be anything but sweet...Nina Fleet might be new to the innkeeping business, but she's savvy enough to know that Cymbeline's tourists aren't enough to keep her fledgling bed and breakfast going. And so, Nina decides to tap into the destination wedding market by taking a booth at the Veils and Vanities Bridal Expo. The twice-yearly event is sponsored by the town's two wedding pros: Virgie Hamilton, the sixtysomething owner of Virgie's Formals, and Roxanna Quarry, a Gen X event planner and Nina's new friend. But everything goes wrong during the expo's fashion show, when Roxanna comes tumbling out of an oversized prop wedding cake, strangled to death by her own scarf.Virgie is arrested for the crime, thanks to Nina's statement to the police about having overheard the woman accusing her partner of embezzlement. Meanwhile, the situation grows tense with her sometimes nemesis and current tenant, the dashing out-of-work actor Harry Westcott. Harry is concentrating on plugging his most recent side hustle ...but he's not too busy to break the news to Nina that her ex-husband is engaged to be married again.Certain that Virgie's only offense is a bad temper, Nina decides to do her own investigating. First, however, she and Harry retrieve Roxanna's now ownerless dog, planning to foster him until a new home can be found. But local gossip soon convinces Nina that others beside Virgie might have had reason to murder Roxanna. As Nina gets close to the truth, she's putting her own life at danger. And when Virgie vanishes after being bailed out of jail by an unknown benefactor, Nina fears that if she can't find the dress shop owner in time, tying the knot will take on a whole new meaning for them both.  (Summary via Goodreads)

Readers will instantly fall in love with the Georgia B & B Mystery series by Anna Gerard.  There are so many things to love thoroughout this series that it will be a no brainer !!   Peaches and Schemes is the third book in this amazing series and readers will be swept into the story immediately.
In Peaches and Schemes main character Nina Fleet, owner of The Fleet House, is attending the annual Veils and Vanities Bridal Expo to promote her bed and breakfast in hopes of  having wedding at the inn.....but the last thing she expects is to have one of her friends who is one of the organizers of the event fall out of the huge wedding cake at the end of the show.....DEAD !  And to make matters worse it appears that Roxanna was murdered and Nina quickly learns that she didn't know her friend at all.  The list of suspects grows quicker than a weed when Nina learns of all the bad things she did to a lot of people.
When Virgie, who is the other organizer of the event and past business partner of the deceased, is arrested for Roxanna's murder, Nina knows that she is not the killer.  With the help of her temporary, non-paying tenant and friend Harry, they put their heads together to try to uncover the real killer......little do they know how close they are to that person until it's almost too late.....
The Georgia B & B Mystery series is so much fun to read !!  Readers will love Nina and her bed and breakfast.  You cannot help but fall in love with the relationship she has with Harry and in this third book, readers will love the direction it looks like Gerard is taking them (but we have to wait until book four to confirm that fact....).  The town, Cymbeline, is somewhere you can easily picture in your head and want to visit in real life, if only it truly existed.  You will love the people and little shops that are there and you know that you would totally be a returning visitor to the Fleet House to see Nina and her adorable dog Mattie as often as you can !!
Review by Missi M.
Posted by Cozy Mystery Book Reviews at 12:55