Deadly Ever After (Lighthouse Library Mystery #8) by Eva Gates 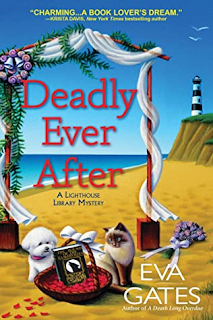 Librarian Lucy's wedding is at stake when a murder interrupts her engagement celebrations. To make it down the aisle, she'll have to find the killer to save the date in the 8th book in the Lighthouse Library mysteries.They're getting married! Lucy Richardson and Connor McNeil have announced their engagement. Their friends throw a party for the couple at Coquina Beach, close to Lucy's beloved Bodie Island Lighthouse Library.

As they're packing up the presents and the (few) leftovers from Josie's Cozy Bakery, who should arrive, but Richard Eric Lewiston III, Lucy's former almost-fiancé and his overbearing mother Evangeline. Push comes to love when Evangeline makes no secret of why she's here: to get Lucy and Ricky back together.

Lucy isn't temped in the least, and Ricky is nothing but embarrassed at his mother's desperate ploy. Before returning to Boston Evangeline throws a dinner party at Jake's Seafood Bar for a reluctant Lucy and her family. Lucy hopes to get the dinner over with and see Evangeline and Ricky returning to Boson. But when a body is found at the restaurant's kitchen door, Lucy is again forced to unwillingly put on her detective's hat and do what she can to save her family and her engagement. Meanwhile, the classic novel reading club is reading The Hound of the Baskervilles, and open war breaks out in the Lighthouse Library when Lucy agrees to temporarily take care of a dog named Fluffy, but Charles the library cat has other ideas.   (Summary via Goodreads)

Deadly Ever After by Eva Gates is the eighth book in her Lighthouse Library Mystery series and by now I would hope that you are a devoted fan and feel like you are a close friend of main character Lucy Richardson.....I know that is how I choose to look at it, I'm even hoping to be asked to be a member of her and Connor's wedding party.  But I'm getting ahead of myself.....
In the Lighthouse Library Mystery series main character Lucy Richardson is the assistant director of the Bodie Island Lighthouse Library in the Outer Banks of North Carolina, lives on the top floor of the lighthouse that houses the library, is engaged to Mayor Connor McNeil and sometimes gets in the middle of a murder investigation.  And in this eighth book, Deadly Ever After, she cannot help herself when the murdered victim ends up being her father's business partner !
While Lucy and Connor are celebrating their engagement at a party on the beach Lucy's father's business partner's wife and son "crash" the party.  No one is more surprised than Lucy seeing as the son, Ricky, is her ex-fiance.  Ricky's mother, Evangeline, never takes no for an answer so Lucy finds herself with family and friends at her cousin's husband's restaurant, Jake's, the following evening to celebrate some more.  Unforrtunately Evangeline is trying to get her son and Lucy back together even though Lucy has made it clear that that will never happen.  All Lucy wants is for Evangeline and Ricky to go back to Boston and leave her alone but when Evangeline's husband, Rich, is found murdered outside Jake's, no one is going anywhere.
Lucy always has a lot on her plate even when there is no murder involved but especially now with the wedding plans and her and Connor are house hunting, solving a murder is not something to get involved in.  However Lucy has known the Lewiston family all of her life so she feels some what obligated to talk to people and see what she can uncover.  Lucy soon learns that the Lewiston family is full of secrets and she is in way too deep....
Not only are readers involved in the murder investigation but we get to know Lucy, the lighthouse library, the town and all the people living there.  Gates knack for drawing the reader into the fold stregthens with every new book in this series.  She not only provides readers will a great mystery to follow but she gets the readers to fall in love with the town and everything it has to offer.  I, for one, cannot wait until the next book to see how Lucy and Connor are doing with their wedding arrangements and the house they will eventually move into as well as all the changes going on at the library.....I jusy know Gates is going to make it memorable !!
Review by Missi M.
Posted by Cozy Mystery Book Reviews at 13:08