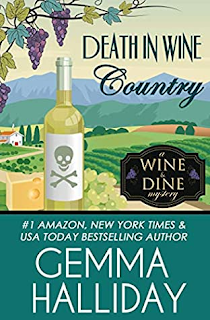 While Emmy Oak started her culinary career as a personal chef to the stars, she's perfectly content to now be back home at her family's Oak Valley Vineyards, running the small but plucky winery. However, when one of her past clients—soap opera star Carrie Cross—purchases a vacation home in Wine Country, Emmy is happy to cater her housewarming party. Only, what starts as a Hollywood- worthy affair ends in tragedy, as one of Carrie's costar guests is killed, and everyone is a suspect. Detective Christopher Grant immediately sets his sights on Carrie's husband, and this time Emmy isn't so sure the tall, dark, and too-handsome-for-her-own-good detective is wrong. She has her own suspicions about the former child actor and his wife's costar. But when a blackmail scheme, a wealthy estranged family, and a shifty cowboy from the wrong side of the tracks enter the scene, Emmy realizes Carrie's husband isn't the only person with reason to want the victim dead. As the danger mounts, the suspects multiply, and things heat up between Emmy and Grant, the killer homes in on a new target...and this is one party Emmy may not be leaving alive! **Simple and delicious recipes and affordable wine pairings included!** "Ms. Halliday is the undisputed queen of the genre." ~ Fresh Fiction "I rank A Sip Before Dying as one of my favorite fun reads. I say to Gemma Halliday, well done!" ~ The Book Breeze "The Wine & Dine Mystery series is a definite to read and keep an eye out for more to follow." ~ Cozy Mystery Book Review Wine & Dine Mysteries: A Sip Before Dying – book #1 Chocolate Covered Death – book #2 Victim in the Vineyard – book #3 Marriage, Merlot & Murder – book #4 Death in Wine Country – book #5 Fashion, Rosé & Foul Play – book #6 Rating: This story does not contain any graphic violence, language, or sexual encounters. Its rating would be similar to PG-13 or what you would find on a Hallmark Channel movie or TV series.   (Summary via Goodreads)
The Wine and Dine Mystery series by Gemma Halliday is an absolute must read !!  This is an awesome series to completely get lost in....
Death in Wine Country is the fifth book in this series and if you are caught up and a fan, it is like going home to visit family and friends.  Even though there is a murder involved, readers cannot help but get swept away in the area and the people.
In Death in Wine Country main character Emmy Oak's old world and new worlds are colliding.  Emmy moved back home to Sonoma from Los Angeles to help run her family vineyard and in this latest book her friend from Los Angeles, actress Carrie Cross and her husband Bert just bought a vacation home in wine country and Emmy is catering their housewarming party which is going to be hosting co-stars of Carrie's from her soap opera show, Carefree Hearts, as well as people involved in the show.   Unfortunately when Emmy is getting ready to leave after the party, Carrie's dog gets out and heads right for the barn where Dante the wild horse is.  When she chases after the dog, she not only catches the dog but finds a dead body..... Harper, a co-star on the soap opera who just happened to be written off the show recently and who Carrie claimed was like a sister to her.
Emmy knows that she should be focusing on the vineyard but she cannot help but get drawn to the case and want to find out who killed Harper and why.  Also she would do anything for her old friend Carrie.  And when Detective Grant has his eye on Bert, Carrie's husband, all thoughts of the vineyard are ignored.
Death in Wine Country has a GREAT storyline with a long list of likely suspects....unfortunately the killer will not be on the reader's radar.  To which I would highly recommend readers just sit back, relax with a snack and a drink, and enjoy the story....and let Emmy and the detective do what they do best.  Oh and on a side note.... Emmy and Detective Grant are finally taking their "relationship" to the next step...or half step.  I know this is a cozy mystery and not a romance but readers can enjoy both and we do in this series for sure !!!
Review by Missi M.
Posted by Cozy Mystery Book Reviews at 14:31