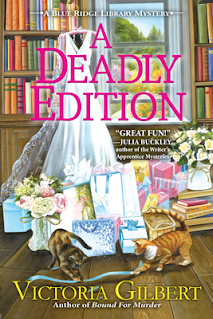 "Til death do us part" could be closer than the bride realizes in Victoria Gilbert's tantalizing fifth Blue Ridge Library mystery.The pursuit to acquire a rare illustrated book turns deadly, and on the eve of her upcoming wedding, library director Amy Webber is drawn into a web of treachery and betrayal that could derail her happy day—and maybe just claim her life.Planning a wedding can be murder—sometimes literally. At a party celebrating their upcoming nuptials, Taylorsford, Virginia library director Amy Webber and her fiancé Richard Muir discover the body of art dealer Oscar Selvaggio—a bitter rival of their host, Kurt Kendrick.Both had been in a heated battle to purchase a rare illustrated volume created by William Morris's Kelmscott Press, so suspicion immediately falls upon Kurt. Amy knows that Kurt has a closet-full of skeletons from his past—but she can't believe he's guilty of murder.Amidst an avalanche of wedding preparations, Amy begins an investigation with the help of her aunt Lydia Talbot and the new mayor of Taylorsford, Sunshine "Sunny" Fields. Much to Lydia's dismay, her boyfriend, art expert Hugh Chen, becomes convinced of Kurt's guilt and launches an investigation of his own. As the case hits painfully close to home, the stakes become impossibly high—and the danger all too real.  (Summary via Goodreads)
What a great cast of characters in the Blue Ridge Library Mystery series by Victoria Gilbert !!
A Deadly Edition is the fifth book in this series and a lot of going on !!!  Main character Amy Webber is getting ready to marry her fiance Richard Muir and they are in the final stages of planning the big day !!  Unfortunately while celebrating their upcoming wedding at the house of family friend Kurt Kendrick, an uninvited guest is found dead in a shed on the expansive property.... and the bride and groom are the ones who found the body !!  The body is learned to be a rival of Kurt's, Oscar Selvaggio.  Oscar is an art dealer and he is bidding on a rare book that Kurt is also interested in and bidding on as well.
When it is ruled that Oscar was murdered by poison it raises the question as to who could have done it knowing that Oscar was not invited to the party and just showed up with his assistant.  There were a number of people who were seen mixing drinks and some who admitted to giving Oscar a drink but they all also deny poisoning him.
Amy should be focusing on the wedding and her happily ever after but being a librarian and one who likes puzzles and doing research, it is with no stretch of the imagination that she is going to look into Oscar, his background as well as those suspected of killing him.  One thing that Amy does not like is that her mysterious younger brother shows up saying his is on vacation from his more mysterious job and will be in town until the wedding.  And when he disappears for a few days without telling anyone and no one can reach him, she cannot help but wonder if he could have had something to do with Oscar's death.
Gilbert provides readers with a vast set of likely suspects in A Deadly Edition and one cannot help but be thoroughly taken in by the story.  Readers will not only want to continue reading to find out who killed Oscar and why but they will want to continue reading until the end to see if Amy and Richard get to the altar and say "I do".......
Review by Missi M.