Checked Out (A Dead-End Job Mystery #14) by Elaine Viets 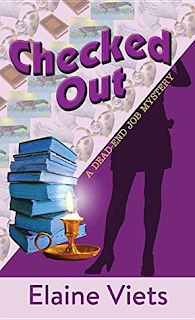 Wealthy socialite Elizabeth Cateman Kingsley has hired Helen to find a missing John Singer Sargent painting, owned by her late father. After his death, many of Davis Cateman’s books were donated to the Flora Park library, and his daughter suspects the small watercolor—worth millions—was tucked away inside one of those dusty tomes.

To search the stacks, Helen applies for a position as a library volunteer and discovers the library director has a catalog of complaints—from a mischievous calico cat named Paris to the mysterious disappearance of various items that some of the more imaginative staff are attributing to a ghost haunting the building.

While her husband Phil sticks his neck out to find a missing necklace, Helen is on her own with no one to lend her a hand. When a dead body turns up in a parking lot, it appears someone is willing to go to any lengths to keep the treasure in the library quiet. Now Helen is bound and determined to find the killer as well as the painting—before she’s taken out of circulation herself.   (Summary via Goodreads)

I have been a fan of the Dead-End Job Mystery series by Elaine Viets since reading the first book, Shop Till You Drop, and every time I read the next book I fall in love a little deeper.  And I think I am going to have to go on record and say that Checked Out, the fourteenth book is my favorite !! I have probably said that with previous books but I cannot help but change my mind with the next book in the series.

As the books grow in number the characters grow and develop more and more and the storyline just keeps getting better and better.  In the early books main character Helen had to take dead-end cash paying jobs so that she stayed under the radar since she divorced her cheating husband and vowed that he would never receive another penny from her as was awarded him during their divorce proceedings.  So she ran away and ended up in Florida.....

Living in Florida she was forced to take these dead-end jobs to pay her bills but she always got caught up in murder cases....then she got to know her next door neighbor Phil at her apartment complex, they fell in love, got married and opened up their own private investigation agency.  They also LOVE their apartment manager, Margery, most of the other tenants and have a lot of fun !!

In Checked Out both Helen and Phil have cases that they are working on.  Phil is going undercover as a gardener for a wealthy couple who had a birthday party for their daughter turning 21.  They gave her a very expensive necklace then left the house so she could party for a bunch of friends.  The next morning the necklace and family golf cart were missing.  So Phil was hired to find out what happened to both...the owners think that someone on the staff did it.  Helen is hired by another wealthy individual whose father had donated his massive library collection to the town library.  But he was known to place important paperwork inside the books and a valuable painting that was willed to the daughter is missing and feared was placed inside a book.  So Helen is going overcover at the library as a volunteer so that she can go through the boxes of books.

Helen's case becomes more difficult when she finds a homeless woman living in the library who claims she found the painting and has hid it for safekeeping until she returns from a job interview but gets run down in the parking lot at the business she was to be interviewed at.  Now Helen not only has to search the library looking for the painting but she has to find a killer !!!

There is so much going on to keep readers attention in this book as well as the whole series.  Readers will love the way that Helen grows throughout the books.  And readers cannot help but enjoy the relationships, especially between Helen and Phil.  Also the friendships with Margery and Peggy are so fun to read about as well.

I highly recommend getting into this series and cannot wait to open up the fifteenth and final book in this series, The Art of Murder.