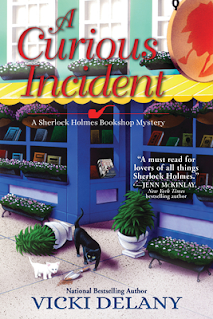 It's up to Gemma and Jayne to root out the killer in national bestselling author Vicki Delany's sixth Sherlock Holmes Bookshop mystery when the winner of a garden tour trophy is left pushing up daisies. "I am not a Consulting Detective," Gemma Doyle reluctantly tells 10-year-old Lauren Tierney, when the little girl comes to the Sherlock Holmes Bookshop and Emporium to beg Gemma to find her missing cat, Snowball. Gemma might not be able to follow the clues to find the cat, but her dog Violet follows her nose to locate the missing kitten in a neighbor's garden shed. Gemma and Violet proudly return Snowball to her grateful owner, and Gemma basks in praise for a job well done. But a few days later Lauren is back with ten dollars in hand, wanting to once again hire a consulting detective, and this time for a far bigger job: Her mother has been accused of murdering her garden club rival.Sheila Tierney's garden, which everyone said was the one to beat for the West London Garden Club trophy, had been vandalized the night before the club's early summer tour. Sheila confronted her former friend and gardening partner Anna Wentworth in a towering rage, and the women nearly came to blows. Later that night, after having won the trophy for best garden, Anna is found murdered and Sheila Tierney is the police's prime suspect. Despite herself, and despite the disapproval of her police detective boyfriend Ryan Ashburton, the game is once again afoot, and Gemma finds herself and Jayne Wilson using their powers of deduction to ponder yet another curious incident.   (Summary via Goodreads)

A Curious Incident by Vicki Delany is the sixth book in her Sherlock Holmes Bookshop Mystery series and main character Gemma Doyle has obtained quite a reputation.  Even though she is a business woman co-owning two businesses, the Sherlock Holmes Bookshop and Emporium and Mrs. Hudson's Tearoom next store she cannot help that is she is a stickler for detail and when there is a murder in her quaint little seaside town of West London, Massachusetts she gets involved.  And in A Curious Incident she is on the "job" in two cases.  First a little girl Lauren comes into the bookstore asking Gemma to find her lost cat Snowball to which Gemma accidentally does find.  However the next case is a tough case and, of course, the police do not want Gemma anywhere near anything relating to the case.

The town is getting ready for the West London Garden Club summer tour and the night before the tour and judging is to take place the top contender's garden is vandalized.  And the owner of that garden just happens to be Lauren's mom, Sheila.  And the second contender in the contest is found murdered in the park !!!  To make matters worse a heated arguement between the deceased, Anna, and Sheila was witnessed by quite a few people so Sheila is taken in for questioning.

Lauren, who is just 11 years old wants to hire Gemma to look into the case and find the person who killed Anna because she doesn't think her mom did it.  Gemma insists that she cannot help Lauren and tries to put it on the police as saying it is their job to do so.  Unfortunately Gemma cannot turn off her overactive brain and she cannot stop thinking about the case.  And when someone close to her is hurt but Gemma was the intended target, she throws all caution to the wind and turns her thinking cap on full speed !!

Readers cannot help but fall in love with the Sherlock Holmes Bookshop Mystery series.  There is so much to love....from the two businesses that revolve around Sherlock Holmes to the relationships and friendships of the characters and, of course, the cases that Gemma gets involved in and the tension between her and the police.  Readers will love Gemma and Jayne's relationship and there is another relationship developing that readers will literally cry at the end of the book over.....but don't worry it will be a good, happy cry !!