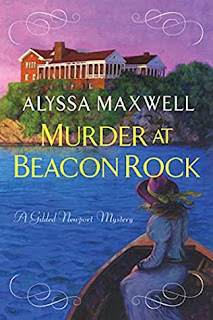 As a reporter, Emma is used to covering Newport’s social events. But this time she is appearing on the arm of her fiancé, Derrick Andrews, at a small but exclusive gathering of the New York Yacht Club at Beacon Rock, the Grecian-inspired summer “cottage” of Edwin and Elizabeth Morgan. The members—which include cousin and Yacht Club Commodore John Pierpoint Morgan and widow Lucy Carnegie, the first woman to be admitted to the Club—are there to discuss their strategy for the next America’s Cup Challenge, to be held in New York Harbor the following summer.

But it’s Emma who must come up with a strategy when she discovers a woman’s body bobbing against one of the hulls of the boats moored at the base of Beacon Rock. Is it possible she fell from the Newport ferry and was carried by the tide? Or could she have drowned herself or fallen victim to foul play?

After the woman is identified as the missing daughter of a yacht designer, the police—with the exception of Emma’s friend Detective Jesse Whyte—hastily conclude she is a suicide, perhaps to quiet any scandal for the Morgans, since her body was found floating near their property. But Emma suspects the woman was murdered and begins to sort through a who’s who of sportsmen, boat crews, and the Newport elite in search of a stone-cold killer . . .   (Summary via Goodreads)

Any time I can travel back in time to spend quality time in Newport, Rhode Island during the early 1900's, I am going to take it.  And Alyssa Maxwell's ability to make it so life like makes it most tempting !! Readers cannot get enough of her Gilded Newport Mystery series and with Murder at Beacon Rock the tenth book in the series, you feel like a resident.

In Murder at Beacon Rock main character Emma Cross is spending time in a different "world" than she is used to.  Even though she has rich relatives that belong in the extravagant Four Hundred group, Emma is of a more relaxed and simple lifestyle.  Unfortunately her fiance Derrick is among this elite group so she has to attempt to fit in and attend a party now and then.  Little did either of them know that attending a party for members of the New York Yacht Club at Beacon Rock would find them pulling a young woman's body out of the water.  They also did not realize that they would be looking into the death, not only for the local newspaper they run together but for their own peace of mind.

It doesn't take long to identify the woman and find a few clues to follow as to how she ended up in Newport but the local police rule it a suicide when they find a photograph on her person and assume she was recenlty left heartbroken and took her own life.  However after Emma talks to the father she finds it hard to believe that Lillian who was a very independent and driven woman would take her own life, especially over a man.

Emma does not want to believe that any of the guests from the Yacht party could be guilty as they are all rich and focused on themselves and their boats to care about others but she cannot help but want to learn more about them and the workers on their yachts.  Unfortunately her detecting brings her too close to the killer and if they could throw a young woman overboard and leave her to die, what's stopping them from doing it again ??

Readers will be on the edge of their seats reading Murder at Beacon Rock. And when you get to a part in the book you will have to remind yourself to breathe because you will be so focused on what you are reading, everything else fades around you.  Maxwell will draw you into the book immediately and you will be powerless to break from her spell.....not that you will want to until you read the last word in the story.

I cannot say it enough.....you have to hop on this series and get taken back in time.  Maxwell's talent for drawing a remarkable picture for you to escape in is better than Bert drew on the sidewalk in Mary Poppins....