The Fragrance of Death (A Sally Solari Mystery, 5) by Leslie Karst 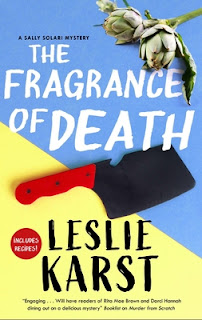 Restaurateur Sally Solari has a nose for trouble, but when her sense of smell goes missing, it’s not just her career on the line . . . it’s her life.Restaurateur Sally Solari is a champion, both in the kitchen and on the case, but after getting mixed up in one too many murders, her nonna’s friends have taken to crossing themselves every time they meet. Sally’s determined to stay out of trouble and focus on her cooking. It’s too bad the food scene in Santa Cruz is cut-throat – sometimes literally. When a head cold knocks out Sally’s sense of taste and smell, at the same time her old acquaintance Neil Lerici is murdered at the annual Artichoke Cook-Off, her powers of investigation are once again called into action. Could Neil have been killed by the local restaurant owner who took his winning spot at the competition? Or maybe by one of his siblings, who were desperate to sell the family farm to a real estate developer? Sally plunges headfirst into the case, risking alienating everyone she knows – including the handsome Detective Vargas, who finds her sleuthing both infuriating and endearing. And soon it’s not just her restaurant and her tentative new relationship that are on the line – it’s her life . . .The Fragrance of Death is a non-stop fun cozy mystery that will keep your mind buzzing and your mouth watering, and contains a selection of delicious recipes to cook at home.  (Summary via Amazon)

The Fragrance of Death by Leslie Karst is the fifth book in her Sally Solari Mystery series and you will be on the edge of your seat trying real hard to try to figure out who the murderer is....and Karst provides readers with a long list of suspects !!

In The Fragrance of Death main character Sally is competing in the annual Artichoke Cook-Out when she is reunited with the Lerici family that she knew growing up.  Sally use to go to Grace's family's farm and go horseback riding when they were in high school.  Grace's brother Neil just happens to have the booth next to Sally so she reconnects with Neil as well.  Unfortunately when the announcements are being made for the winners and Neil's name is called, he does not appear.  Shortly after he is found behind the booths by the dumpster with a head injury and an artichoke stuffed in his mouth....Sally responds when she hears a scream and knows that there is no helping Neil.

Sally's friend Detective Martin Vargas knows she has history with the famiy so he asks Sally to be his eyes and ears while around the family to see is she finds anything out that he wouldn't. Even though Sally is kind of investigating the family, she is also enjoying spending time with Grace as the two have taken to going for rides on Grace's horses.  Sally gets to know Grace more as well as her parents and wants to eliminate them from the list of suspects, unfortunately she is unable to.  Fortunately the family is not the only people on the list but when Sally oversteps, she is told by Detective Vargas to stay away from the Lerici family and anyone else they suspect of the murder.

Not only is Sally having a hard time leaving the case to the professionals, she is also having professional problems as well.  Sally co-owns and runs the Gauguin restaurant and after recovering from a sinus infection she finds out that she has lost her sense of smell and taste.  She tries to hide it for as long as she can until it affects her work and almost gets her and her cousin killed !!!

Karst knows how to weave a story to ensure that readers will be unable to stop reading.  And in this latest installment of the Sally Solari Mystery series, she has crafted a nice list of suspects and reasons people wanted Neil out of their way.  Readers will thoroughly enjoy reading The Fragrance of Death and will not stop until they have found out who killed Neil and why.