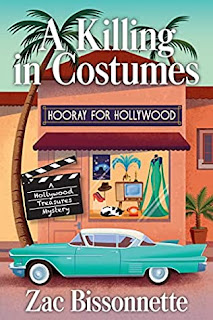 Stardom fades fast when you’re on the line for murder, in this debut cozy mystery perfect for fans of Richard Osman and Jenn McKinlay.

Jay Allan and Cindy Cooper were soap opera stars in the late ’90s, a wholesome young husband-and-wife duo who combined musical talent with humor and charisma. When the truth about their sexual orientations came to light, their marriage and TV careers ended, but decades later they have remained friends. Together, they open Palm Springs’ chicest movie memorabilia store, Hooray for Hollywood--but no customers and dwindling finances spell trouble.

A Hail Mary arrives in the form of Yana Tosh, a ninety-year-old diva of the silver screen who has amassed a valuable collection of costumes and props and is looking to sell. But first, Jay and Cindy have to beat their competition, a vice president from a mega-auction house with ten times their resources. And when he winds up dead, they become prime suspects in the murder.

With their freedom and livelihoods on the line, Jay and Cindy desperately need to clear their names. There are plenty of other potential suspects, but they'll have to solve it soon before they're forced to trade in their vintage costume collection for two orange jumpsuits.   (Summary via Goodreads)

Zac Bissonnette has a hit with his debut in his Hollywood Treasures Mystery series !!!!  A Killing in Costumes has a very unique storyline and setting that will have you engrossed throughout the entire book.

If I were to use one word to describe A Killing in Costumes, that word would be SECRETS.  Everything within this story is surrounded by secrets, some are recent secrets and some are secrets from long ago....luckily main characters Jay and Cindy can see through the lies and secrets to solve the murder and save their reputations and their store.

In A Killing in Costumes Jay and Cindy once were Hollywood stars in a soap opera as well as real life husband and wife.  Sad to say everything changed when they both came out of the closet together ending their marriage as well as their careers.  Luckily they both bounced back when they went their separate ways, Jay having a successful Vegas act, Cindy going back to school for finance and finding love.  When Cindy's wife Esther passes, Cindy decides to follow the dream that they had and open up Hooray for Hollywood, a movie memorabilia store.  Jay follows Cindy to Palm Springs to help with the store and they also decide to live together as they are best friends and it just makes sense.

Jay and Cindy have a meeting with Yana Tosh who is an elderly actress who has accumulated a huge collection of costumes and props from the movies and she has all the paperwork to back their originality.  Unfortunately they are competing with a huge mega-auction house for the rights selling the collection.  Unfortunately, again, when their competition is found dead shortly after they met with him, the police have them at the top of the list of suspects.

With their business and their innocence on the line, they decide to look into the murder themselves.....even though they know nothing about solving crimes, other than watching Murder, She Wrote, that is, and the local detective, Simon Fletcher, telling them to stay out of his investigation, they throw caution to the wind and stay on point.

Readers will love A Killing in Costumes !!  Bissonnette has a talent for drawing readers in and keeping a hold on you until you finish the book.  A Killing in Costumes has a unique storyline that readers will thoroughly enjoy and the writing will open your imagination up wide !!  There will be times that you will feel like you are right there in the story and when the crime is finally solved, it will blow your mind away !!! This is one case that you will be completely shocked over !!!