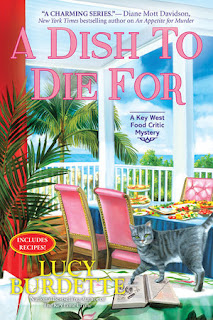 Peace and quiet are hard to find in bustling Key West, but Hayley Snow, food critic for Key Zest magazine, is taking the afternoon off for a tranquil lunch with a friend outside of town. When she comes home, she discovers her husband Nathan’s dog, Ziggy, has disappeared. She follows his barking, to find him furiously digging at a shallow grave with a man’s body in it. Davis Jager, a local birdwatcher, identifies him as GG Garcia, a rabble-rousing Key West local and developer. Garcia was famous for over-development on the fragile Keys, womanizing, and refusing to follow city rules—so it’s no wonder he had a few enemies.

When Davis is attacked in the parking lot of a local restaurant after talking to Hayley and her dear friend, the octogenarian Miss Gloria, Hayley is slowly but surely drawn into the case. Hayley’s mother, Janet, has been hired to cater GG’s memorial service reception at the local women’s club, using recipes from their vintage Key West cookbook—and Hayley and Miss Gloria sign on to work with her, hoping to cook up some clues by observing the mourners.

But the real clues come when Hayley begins to study the old cookbook, as whispers of old secrets come to life, dragging the past into the present—with murderous results.   (Summary via Goodreads)

I haven't had the privilege of reading the Key West Food Critic Mystery series by Lucy Burdette from the beginning but that doesn't matter.  As soon as you open one of the books in the series, you will get into it immediately !  You will feel like you are living on a houseboat on Houseboat Row next door to Hayley, Nathan, and Miss Gloria.

A Dish to Die For is the twelfth book in the Key West Food Critic Mystery series and Hayley, as always, is in over her head in everything.  Her and Nathan are still navigating married life as they recently got married, they are living on their own houseboat on Houseboat Row next door to Hayley's best friend, 83 year old young Missi Gloria.  Nathan is a detective on the force and trying, unsuccessfully, to keep Hayley out of his investigations.  Hayley is enjoying her job as a food critic writing for a local magazine all about food in Key West.

When readers begin reading A Dish to Die For Hayley and her good friend Eric have taken their dogs to a small beach a little ways away from Key West where their dogs can run off leash and the humans can sit and talk somewhere where it's not so crowded and noisy.  Unfortunately Ziggy, Nathan's dog, runs away and won't stop  until Hayley investigates....and when she does, shefinds Ziggy digging up a partially buried, dead man,

Even though Hayley has a lot on her plate, she is still drawn to the investigation of the dead man.  And when her mom is asked to cater the memorial service for him, Hayley assists her mom and step-dad in the task in hopes of finding out more information on the deceased, GG Garcia.

Even though the murder was not committed in Nathan's jurisdiction, he is asked to help with the investigation as well as his estranged father who is in town for work as well as to visit and meet Hayley.  Needless to say there are enough professionals on the job to solve the murder but Hayley has the knack for getting people to talk to her and sometimes tell her deep, dark secrets......

I could read any book in the Key West Food Critic Mystery series and totally enjoy the escape to Key West.  I would love to hang around with Hayley and Miss Gloria on either of their houseboats having a glass of wine or cup of coffee.  I wouldn't even mind spending time with Hayley's mother and Sam as they prepare for one of their catering jobs.  I could read one of these books even without the murders that occur.  Even though the murders are always the center point, the books could still be quite entertaining without them.  Burdette's choice of Key West, Hayley's job, her mom's occupation, the settings and the food alone with have readers coming back for more.....and the murders and the back stories will have readers asking for more.  You will always want more of this series !!!!