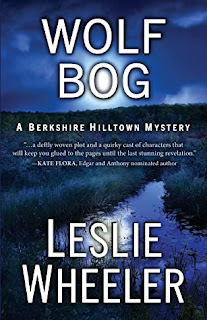 It’s August in the Berkshires, and the area is suffering from a terrible drought. As wetlands dry up, the perfectly-preserved body of a local young man, missing for forty years, is discovered in Wolf Bog by a group of hikers that includes Kathryn Stinson. Who was he and what was his relationship with close friend Charlotte Hinckley, also on the hike, that would make Charlotte become distraught and blame herself for his death?Kathryn’s search for answers leads her to the discovery of fabulous parties held at the mansion up the hill from her rental house, where local teenagers, like the deceased, mingled with the offspring of the wealthy. Other questions dog the arrival of a woman claiming to be the daughter Charlotte gave up for adoption long ago. But is she really Charlotte’s daughter? And if not, what’s her game? Once again, Kathryn’s quest for the truth puts her in grave danger.  (Summary via Amazon)

Wolf Bog is the third book in the Berkshire Hilltown Mystery series by Leslie Wheeler but you do not have to read the previous two books in order to be allured into the story.  Wheeler's choice of words and the incredible way she has with putting the words together on paper is a form of artwork.

In Wolf Bog Kathryn Stinson who works as a curator in a small private library in Boston but spends weekends in the Berkshires is intigued after finding a dead body when she goes on a hike with friends.  She is especially curious after seeing her friend Charlotte's reaction and thinks it is her fault that the person died.....forty years ago !!  It is learned that the person found in the bog was a boy Denny who grew up in the area and he and other local kids partied at a rich girls house, the house that Kathryn's friend Betty now lived in.....and Betty had given her a bunch of old photos that were left at the house when they moved in.  Kathryn is very interested in the photos seeing as she is learning about that time and now there was a dead body found of one of the group from then.

As Kathryn looks into the photos and Denny's death, her friend, Charlotte, is also dealing with another life changing situation when the daughter she gave up for adoption 40 years ago shows up at Charlottes.  Those closest to Charlotte are not as trusting as her and question the young woman's intentions.

There is a lot going on in this quiet little town in the Berkshires stirring up events that happened 40 years ago....and Kathryn is trying to piece everything together.  Readers will not be able to stop reading Wolf Bog....you will want to know all the past secrets and the new secrets that are coming to light as events unfold.  Readers will be on the edge of their seats as you get deeper and deeper into the story.  Clues are uncovered from 40 years ago and how they relate to the present will blow your mind !!!  Wheeler has an amazing talent of drawing you into the story that you may forget it is not real........