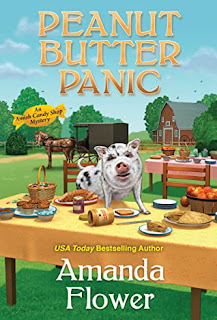 Thanksgiving is Bailey King’s busiest holiday weekend. This year promises to be even more hectic, since Bailey’s candy shop, Swissmen Sweets, is providing desserts for Harvest, Ohio’s first village-wide Thanksgiving celebration. Yet, even with a guest list close to seven hundred people—Amish and English alike—the event’s organizer, Margot Rawlings, is unfazed . . . until she discovers her mother, former judge Zara Bevan, will be in attendance.Zara’s reputation as a harsh critic is matched only by her infamy as a judge who has actively harmed the Amish community. So no one is prepared when Zara arrives with much younger boyfriend Blaze Smith and reveals their impending nuptials at dinner. That should have been the day’s biggest news, except shortly after the announcement, Blaze suffers an allergic reaction to something he’s eaten and dies on the spot.Now, Bailey’s desserts are prime suspects, along with Margot and nearly everyone who attended the meal. With such a cornucopia of possibilities, Bailey must dig in and get to the bottom of this murder, before the killer goes up for seconds….. (Summary via Goodreads)

I love opening up one of the books in the Amish Candy Shop Mystery series by Amanda Flower.  There is so much to love and get lost in when you read this series and Peanut Butter Panic is no exception.

Peanut Butter Panic is the seventh book in the Amish Candy Shop Mystery series and as you read this book, you will feel like you are right there hanging around the square in Harvest, Ohio enjoying everything the town has to offer.....even murder !!

In Peanut Butter Panic the residents of Harvest are getting ready to celebrate Thanksgiving in the square.  This is a big event as it is going to include the English residents as well as all of the Amish community.  Margot Rawlings is the one in charge of events around the square and she has left no margin for error.  Nothing can rattle this woman except the arrival of her mother Zara.  Her mother was a lawyer and judge in Harvest years ago and put alot of people in jail, including members of the Amish community. And when Zara shows up with a much younger gentleman that she introduces as her boyfriend, Margot is not happy !!

Unfortunately things do not go well when Zara's boyfriend, Blake, drops from an allergic reaction right after they have announced their engagement.  And things do not get better when he later dies at the hospital.

Bailey King wants nothing more than to work in her family's candy shop, Swissmen Sweets, with her grandmother and friend Charlotte but when she is asked to look into Blake's death by Zara, she is unable to say no.  Bailey is also trying to figure out her relationship with Aiden now that he has a new job 2 hours away and is both happy and confused when he shows up back in town to investigate the recent murder.

Bailey always has a lot on her plate, sometimes the plate is overflowing, and in Peanut Butter Panic that is exactly the case.  Bailey has a lot going on in the store as this is it's busy time and also she has expanded it to online ordering so she should be putting all of her focus on that.  Unfortunately she really needs to try to figure out where she stands in Aiden's life now with his new job and the distance between them.

Readers will be unable to put this book down !!  There is no way that you cannot be drawn into the story immediately  !!  You will not be able to rest until you get to the bottom of this new murder and when you get to a certain point in the story, there will be no stopping !! Flower draws you in like no other and you are powerless to stop ....just give in to the master and transport yourself to Harvest.......you will be glad you did !!!