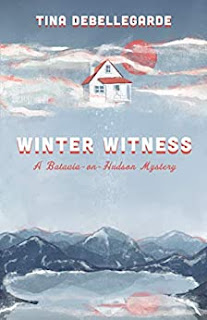 When a beloved nun is murdered in a sleepy Catskill Mountain town, a grieving young widow finds herself at the center of the turmoil. Bianca St. Denis is searching for a job and seeking acceptance in her new home of Batavia-on-Hudson. Agatha Miller, the nun’s closest friend and the ailing local historian everyone loves to hate, shares her painful personal history and long-buried village secrets with Bianca. Armed with this knowledge, Bianca unravels the mysteries surrounding the death while dealing with the suspicions of her eccentric neighbors.However, Bianca’s meddling complicates the sheriff’s investigation as well as his marriage. Can Sheriff Mike Riley escape his painful past in a town where murder and infighting over a new casino vie for his attention?Danger stalks Bianca as she gets closer to the truth. Can the sheriff solve the mystery before the killer strikes again? Can the town heal its wounds once the truth has been uncovered?  (Summary via Goodreads)

A little town with a lot of secrets....that is what Winter Witness is in one sentence.  Winter Witness is the first book in the Batavia-on-Hudson Mystery series by Tine deBellegarde and readers will be drawn in immediately.

in Winter Witness readers are introduced to the residents in the little town of Batavia-on-Hudson and the first thing you will experience is a murder.... the FIRST sentence actually.  Sheriff Mike Riley left New York City to work in this small town thinking it would be a slower, quieter pace for him.  Unfortunately he is looking at a murder and the murdered victim is beloved Sister Elaine Fisher.

Also new to this little town is Bianca St. Denis.  Her and her husband Richard moved to town three years ago but they are still not considered locals.  Unfortunately Bianca is dealing with Richard's death which happened not that long ago and now it seems she would mourn Sister Elaine.  Even though Bianca is still new to the town and dealing with life without Richard, she is making herself do things and one of the things that she likes to do is visit with Agatha Miller.  Agatha is an elderly woman with terminal cancer who recently fell and broke her hip and is confined to her bed to recover.  Bianca and Agatha have developed a kind of friendship and knowing Bianca is trying to become a writer Agatha decides to tell her her story and let her write it.  But before they can get into the heart of her story, Agatha dies.  It is ruled that she dies from hypothermia when she is found dead with the window open.  Bianca knows that there is no way Agatha would have been able to open the window and if the window was open and she got cold, she would have called someone to come close it.

While Sheriff Mike works on interviewing everyone in town to find answers to Sister Elaine's death, Bianca cannot let Agatha's death go knowing what she knows......

For Batavia being a small town, it seems the residents are clueless to how many secrets there are.  And when Bianca begins to unravel some of the secrets, she doesn't realize that she is putting herself in danger !!

Readers will be drawn to this story and when you get to a certain spot in the story, you will not want to stop reading until you know the truth !!  deBellegarde spins a crafty web and you will be powerless to escape getting stuck in the middle.....