Murder is a Piece of Cake (Josie Marcus, Mystery Shopper #8) by Elaine Viets 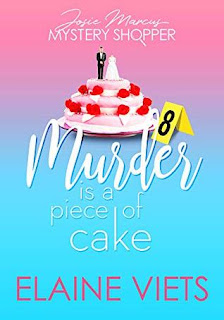 Before mystery shopper Josie Marcus can say “I do” she must solve a matrimonial murder to keep her in-law from becoming an inmate...As a bride-to-be, Josie’s latest assignment is a gift—mystery shopping flower and cake vendors for a popular St. Louis wedding website. She even meets another bride, Molly Deaver, at the local florist. Turns out, Josie and Molly have a lot in common, including the groom! Molly has been stalking Dr. Ted for months, but after his high-maintenance mother, Lenore, confronts the faux fiancée, everyone believes Molly is history. Instead, she’s murdered and Ted’s pistol-packing mama is cuffed for the crime.

While it’s tempting to leave her future mother-in-law behind bars, Josie knows she and Ted can’t get married until Lenore is freed. It’s up to Josie and her amateur sleuthing skills to unwrap this case, clear Lenore’s name, and unveil the real killer…or her wedding bells could soon become death knells.   (Summary via Goodreads)

It is no secret that I am a huge fan of the Josie Marcus, Mystery Shopper Mystery series by Elaine Viet and I probably say this every time but the eighth book in the series, Murder is a Piece of Cake is my favorite !!

When you read books in a series you become familiar with the town and fall in love with the characters....and you cannot help falling in love with Josie, her daughter Amelia, her mother Jane, her best friend Alyce and even the pesty neighbor next door, Mrs. Mueller and now Josie's fiance, soon to be husband by the end of Murder is a Piece of Cake, Dr. Ted.

In Murder is a Piece of Cake Josie and Ted are planning their wedding and doing a pretty good job of it and staying within their allowed budget .... that is until Ted's mother comes to town and wants to change everything !!  Unfortunately Ted's mother, Lenore, is going to have more pressing problems when she is arrested for murder !!

Ted is a veterinarian and runs a clinic with a partner and he is getting ready to film his first Dr. Ted's Pet Vet Tips for local Channel Seven and Josie and Lenore are both there to support him.  Unfortunately they are hit with a huge surprise when Molly walks in wearing a wedding dress insisting that Ted is her fiance and she is there to pick him up for their wedding !!  Turns out Molly has a dog that is Ted's client and she fixated on Ted to the point she was stalking him and believes that he is her fiance and they are to be wed.  Before things can really be resolved Josie and Ted find Molly shot to death in her car outside his clinic....and the gun used is the same one belonging to Lenore and Channel Seven filmed her talking about it.

Josie knows that if she wants to marry Ted on their planned and mostly paid for day she has to find Molly's real killer and prove Lenore's innocence...without getting herself killed in the process.

Readers will LOVE, LOVE, LOVE the Josie Marcus, Mystery Shopper series and when you get to this eighth book, I'm sure it will be your favorite also !!  How can you not fall in love with everything Viets writes !!!  I will also admit that I got emotional at the end of Murder is a Piece of Cake when Josie and Ted have their magical wedding day !!  I cannot wait to see where Viets takes us next with Fixing to Die......