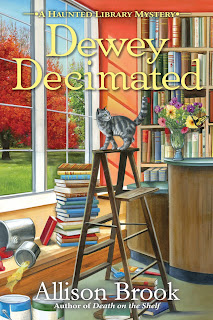 Librarian Carrie Singleton is back on the case, alongside library ghost Evelyn, in the sixth installment of Agatha Award nominee Allison Brook’s Haunted Library mysteries.Carrie Singleton is just off a hot string of murder cases centered around the spooky local library in Clover Ridge, Connecticut. She could really use a break—but no such luck, as she; Smokey Joe, the resident cat; and Evelyn, the library’s ghost, are drawn into another tantalizing whodunit.First, a dead body is found in the basement of the building attached to the library, and it turns out to be Carrie’s fiancé’s Uncle Alec, who Dylan hasn’t seen in years. But Alec has no intention of truly checking out, and his ghost makes itself at home in the library, greatly upsetting the patrons. Carrie and Evelyn work hard to keep Alec out of sight, but what was he doing in Clover Ridge to begin with? And why was he killed?Meanwhile, the town council, of which Carrie is also a member, is embroiled in a hot-headed debate over the fate of the Seabrook Preserve, a lovely and valuable piece of property that runs along Long Island Sound. Turn it into an upscale park? Sell it to a condo developer? Or keep it as protected land?As the dispute rages, there’s another murder, this time involving a council member. Could the two murders be connected? And could Carrie be next on the hit list?  (Summary via Goodreads)

The Haunted Library Mystery series by Allison Brook is a fun packed, fast moving series that you will love getting lost in....and one of the main characters is a ghost !!

Dewey Decimated is the sixth book in this series and main character Carrie Singleton has a lot on her plate....which is nothing new for her or for the devoted readers of this series. Carrie works in the library in her town, Clover Ridge, and the library is just beginnng to renovate the vacant building next door to expand the library.  Seeing as Carrie is in charge of the programs and events for the library this is a huge deal for her.  Unfortunately right before the work starts a dead body is found wrapped up in a blanket in the basement....and when it is finally identified no one is more shocked than Carrie and her fiance Dylan.  The body is identified as Dylan's uncle Alec but Dylan doesn't have any idea why his uncle was in town some years ago and how his body ended up in an old abandoned building.

Also in Dewey Decimated Carrie has agreed to be on the town council replacing a member who is moving in the near future.  The council is about to vote on plans for the Seabrook Preserve, a large property along the Long Island Sound.  There are three suggestions that the council needs to look into and vote for the best options for the land and the town.  Unfortunately this is not going to be an easy vote as no one wants the same thing.

As if things cannot get worse for Carrie the ghost of Uncle Alec shows up in the library and Evelyn, the library resident ghost, is trying to help him process everything and they are looking at Carrie to solve his death so that he can continue onto his final resting place.

In Dewey Decimated readers will love everything they read !  There is no way to stop from falling in love with the characters, the storyline, the town and everything else involved.  And Brook is going to expose some very important secrets that are going to be game changing for a few of the characters and the readers are going to be overjoyed that this step finally happens !!!!