A Botanist's Guide to Parties and Poisons by Kate Khavari 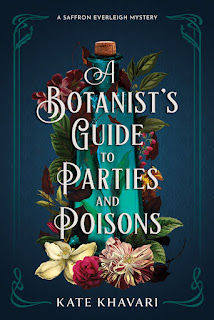 Saffron Everleigh is in a race against time to free her wrongly accused professor before he goes behind bars forever. Perfect for fans of Deanna Raybourn and Anna Lee Huber, Kate Khavari’s debut historical mystery is a fast-paced, fearless adventure.

London, 1923. Newly minted research assistant Saffron Everleigh attends a dinner party for the University College of London. While she expects to engage in conversations about the university's large expedition to the Amazon, she doesn’t expect Mrs. Henry, one of the professors’ wives to drop to the floor, poisoned by an unknown toxin.

Dr. Maxwell, Saffron’s mentor, is the main suspect, having had an explosive argument with Dr. Henry a few days prior. As evidence mounts against Dr. Maxwell and the expedition's departure draws nearer, Saffron realizes if she wants her mentor's name cleared, she’ll have to do it herself.

Joined by enigmatic Alexander Ashton, a fellow researcher, Saffron uses her knowledge of botany as she explores steamy greenhouses, dark gardens, and deadly poisons. Will she be able to uncover the truth or will her investigation land her on the murderer’s list?   (Summary via Goodreads)

A Botanist's Guide to Parties and Poisons by Kate Khavari is a great debut to her Saffron Everleigh Mystery series.  This book has a very unique storyline that draws the reader in immediately.

In A Botanist's Guide to Parties and Poisons readers are introduced to Saffron Everleigh who is a research assistant in the botany department of the University College London in the year 1923.  She is the only woman in a position of this magtitude and she loves her job.  Unfortunately while attending a dinner party someone falls very ill, ending in a coma, and her boss, Dr. Maxwell, is arrested when it is determined that the woman was poisoned.

Saffron knows that Dr. Maxwell would never do such a thing and determines to find out who did it......unfortunately she has no idea where to begin looking.  While there are a number of people within the college getting ready to head on a six-month long expedition to the Amazon, she has also added some of them to her suspects list.  However she is unclear if the person poisoned, Mrs. Henry, was the actual intended target or if her husband or someone else going on the trip was the target.  Luckily for Saffron, another researcher in the department, Alexander Ashton, decides to help her with her investigating....or maybe he is spending time with her for another reason.....

As readers get into the story, they will soon learn how far Saffron will go to prove Dr. Maxwell is innocent....and you will be shocked at the length she goes.....but you will also love the determination and fire this main character has !!  Readers will love Saffron and Alexander together working on solving the case as well as getting to know each other and the feelings they are developing.  Readers will also enjoy the pace of the storyline being set back in time when there were no computers and crimes were solved completely differently that modern times.

Readers will be hooked and when you get to the last page there will be no way for you not to want to read the next book in this series when it comes out.  I know I am looking forward to see how the expedition went and how Saffron is enjoying work and if her and Alexander can resume their relationship where they left off.....