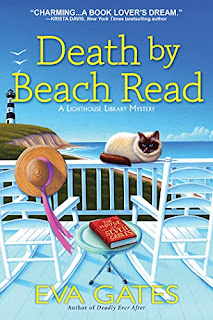 Librarian Lucy’s new historic house comes with a lot of baggage and family secrets. Can she put them to rest or will a killer bring Lucy’s family to their downfall, in the 9th Lighthouse Library mystery. It’s spring in the Outer Banks of North Carolina, and Lucy and Connor have moved into their new home at last, a historic cottage on the Nags Head Beach. The house needs a lot of renovations, but they worked hard over the winter to get it ready. Lucy is now happily immersed in her work at the Bodie Island Lighthouse Library, planning her wedding, and decorating the house. That is, until a dead body disrupts their peaceful new abode.    The first night Lucy’s alone in the house, with the company of Charles the library cat, she hears sounds. Investigating they see footsteps in the dust of the unfinished living room, and the door to the outside is open. Lucy's reminded that the house is said to be haunted: forty years ago the teenage daughter of the owners fled in the night, and never again stepped foot inside her family home. But the sounds have an all-too-human origin and one evening Lucy and Connor find the dead body of a man they don’t even recognize in their kitchen. They soon realize he has a long-time connection to their house. Lucy's forced to find out what happened all those years ago and why it’s threatening her happiness today. Meanwhile, the Classic Novel Reading Club is reading The House of the Seven Gables by Nathanial Hawthorne, a book about another old house full of secrets. Can Lucy find parallels to her own situation in Hawthorne’s fiction before the killer strikes again?  (Summary via Goodreads)

Having read all of the books in the Lighthouse Library Mystery series by Eva Gates I can honestly say that I am a devoted fan with well invested attention and care for the characters and the town of Nags Head in the Outer Banks of North Carolina.  I have seen the characters grow, celebrate life, mourn death, and come together as a town.  I truly love when I can open one of the books in this series and travel to Nags Head and spend time with some of the people that I wish were real and I could visit with in person.

Death by Beach Read is the ninth book in this series and there is a lot going on.  Main character Lucy Richardson who works at the Bodie Island Lighthouse Library and lives at the top of the lighthouse in a little apartment has moved out of the apartment and in with her fiance, Connor McNeil in a beach house.  Unfortunately the house that they have moved into has sat vacant for many years and requires a lot of TLC which Connor and his father are doing together.  Not only has the house stood empty for so long but it seems that there are some old secrets surrounding the house and the family that use to live there.

While Connor is away at a convention and Lucy is alone in the house with Charles the library cat, she hears noises and notices some things that lead her to believe someone was in the house.  Then shortly after Connor returns home and the two of them return home, they find an elderly man dead in their kitchen.  When the man is identified as one of the brothers that grew up in the house it opens up a huge can of worms and not the kind you can use for fishing.  Jimmy Harper, one of the children, from the family that owned the house left Nags Head many years ago and his brother Ralph and sister Jo haven't heard or seen him in years.  It is rumored that Jimmy thought there was a family treasure in the house and maybe he returned to claim it.  No one believes that there is a treasure of any kind in the house and Lucy and Connor have been all through the house and insist that nothing of value was left behind.  Unfortunately someone still believes there is a treasure and will stop at nothing to get their hands on it.

Lucy does one of the things she does brilliantly and looks into the history behind the family and the house as well as why Jimmy returned.  Unfortunately she doesn't realize that what happened all those years ago would have such an impact of things going on now in her house.  And she doesn't realize someone close to her is the one still looking for this treasure.  Luckily she has Charles the cat looking out for her and she figures things out before someone dies or gets seriously hurt.....her !!!

Readers will NEVER see what is coming in Death by Beach Read !!  The way that Gates maneuvers the characters and the plot of the story and makes a character from another book such an important part of this story is an art like no other.  I highly recommend reading any and all books in the Lighthouse Library Mystery series and I bet you will want to move into town and hang out with everyone you read about !!