Something's Guava Give (Trouble in Paradise! #2) by Carrie Doyle 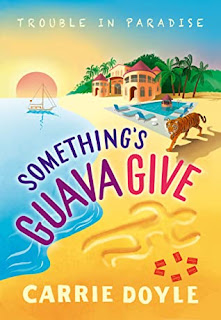 Nothing ruins an ocean view like a body on the beach!Plum Lockhart went out on a limb when she ditched her corporate job in New York City and moved to the Caribbean island of Paraiso. Now the head of her own villa broker agency, Plum spends her days chasing down clients and lounging on white sand beaches.But the sweet life turns sour when a publishing heiress is found dead at the mansion of an eccentric tycoon, Dieter Friedrich. Even worse, Plum's old colleague cashes in a favor and asks her to investigate. It looks like she'll need to fit a murder case into her already jam-packed schedule!Friedrich is known for his shady dealings, but he's not the only bad apple on the island—Plum will have to contend with a scheming millionaire, a sleazy rockstar, and devious B-list celebrities. And joining Plum once again is Juan Kevin Munoz, the distractingly gorgeous Director of Security. Despite the sparks between them, they'll need to stay focused on the case—there's a murderer hot on their heels!   (Summary via Goodreads)

Something's Guava Give is the second book in the Trouble in Paradise Mystery series by Carrie Doyle and I want to live in this paradise !

In Something's Guava Give main character Plum Lockhart has moved to Paraiso, an island in the Caribbean to reinvent herself and boy is she doing it in style !!  After moving to Paraiso from New York City for a job in the first book in this series, It Takes Two to Mango, and getting involved in a murder investigation she takes things to the next level in Something's Guava Give.  She left her job and opened up a competing business, Plum Lockhart Luxury Retreats, a villa broker agency.  She was fortunate enough to take another employee, Lucia, with her.

In Something's Guava Give Plum is asked to go to the office of the head of security by her New York friend Gerald when his assistant which is also the boss's daughter causes trouble at the resort.  Luckily Plum and the head of security Juan Kevin has history and she has no problem going there to help out Gerald's assistant, Arielle.......unfortunately Arielle is asked to vacant the resort which she does.  However she goes to the residence of a friend of her parents and ends up dead the next morning.  Gerald rushes to Paraiso to try to find out what happened and when it is ruled murder, he convinces Plum to look into the case and find out who killed her.

Readers will love reading this series and even though there are only two books in the series, so far, they are packed full of great material and people and you will want to jump on a plane as fast as Gerald did and find your own piece of paradise.....while hopefully staying out of trouble and staying alive.

In Something's Guava Give Doyle provides readers with a great cast of characters to add to your list of suspects and when something else happens to shake things up, readers will be sent back to the drawing board to start all over again.  Doyle also has the amazing ability to open your imagination so that what you are reading will come alive in your head.  You will be able to picture everything as if it were actually real and it will leave you breathless......