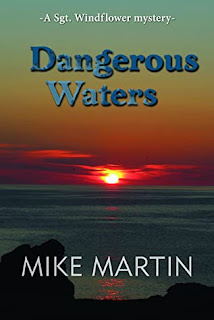 Even as Windflower tries to move away from life as a Mountie, the lure of an investigation is too strong to resist. This time a series of missing men, one of whom turns up dead, gets his attention. Then some interesting foreign visitors show up in a snowstorm and another adventure begins to unfold.There’s a trip to the special island of Saint Pierre just off the coast of Newfoundland and more than enough food to meet any appetite. Eddie Tizzard and the gang are back to help out where required and Sheila and Windflower’s little girls provide him with the support and love he needs to navigate some very dangerous waters.Come back to Grand Bank and come close to the fire while we tell you another great story in the Sgt. Windflower Mystery Series.   (Summary via Goodreads)

I love reading the Sgt. Windflower Mystery series by Mike Martin.  You can get lost in these books and feel like you are right there in Grand Bank hanging around with Windflower, Sheila, Tizzard, Carrie or someone else....maybe Herb Stoodley at the Mug-Up Cafe.

I thought when Windflower retired from the Royal Canadian Mounted Police things would be different and not as interesting but I was totally wrong.  Now he gets to pick how he wants to be involved with the RCMP as a consultant....and he stills gets plenty of quality time with his wife, Sheila, and their daughters, Stella and Amelia Louise, and still gets time to work at the B&B they own.

In the twelvth book, Dangerous Waters, Tizzard, who took over for Windflower at the RCMP detachment has his hands full when three local men are reported missing and one shows up dead in the water.  Luckily for Tizzard Windflower is convinced to help out on the case as a consultant when it is discovered that a group of Germans passing through might be mixed up in the case.  As things progress the case gets more complicated when money and drugs are added to the mix.

There is so much to love within the Sgt. Windflower Mystery series......from the characters and their relationships, to the food and the town, to the quotes Windflower and friends mention trying to outdo each other, to the crimes commited and the way the RCMP goes about solving them (you gotta love Betsy !!) to when Windflower goes out back to do his smudging to the dreams he has and now Tizzard has them also !!  You can even enjoy reading about just hanging out with Windflower when he is walking Lady, reading bedtime stories to the girls or playing with them, to the talks he has with Sheila, or going to the Mug-Up for coffee.  There doesn't have to be much going on for you to be entertained with this series.  Martin has a knack of pulling you in instantly and your attention is maintained until you get to the last word in the book.  This, by far, is one of my favorite series to read because as soon as you read one book, you feel like a part of the family and will grab the next book as soon as you can so you can reconnect with all your favorite characters.