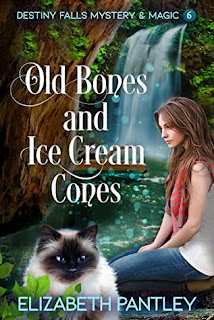 A boyfriend who’s missing. Or was. . . Or is. . . A boat full of old bones. A community ice cream social. A friend in trouble, a spiteful witch, and an angry villain. The mysteries and fun abound in Destiny Falls. Hayden, Latifa, and their family and friends are up for the excitement and adventure.Old Bones and Ice Cream Cones follows the series format of combining two stories that blend into one. A murder mystery and the island mystery.The Island Mystery: Hayden’s boyfriend Han is missing. But she swears she saw him zoom by in his car. She’d thought it was a surprise, and that he was home early from his secret service case. She was wrong. The surprise is that his signal isn’t pinging, and no one knows where he is. There appears to be black magic behind his disappearance. Can they learn who’s responsible and bring Han safely home?The Murder Mystery: A pile of old bones is found in an ancient fishing boat. They could be tied to the disappearance of two young women years ago, back when many of the Destiny Falls people where in high school. Many of the citizens had bad history with the students. Do the bones belong to them, and what happened? Were they murdered? And could the murderer be living among them?Hayden and Latifa’s many adventures in Destiny Falls will keep you guessing with each book in this fun and intriguing series."Intriguing and totally unput-downable!” ~ Goodreads“You cannot get enough of this series!” ~ Cozy Mystery Book Reviews“One of the most creative series I’ve ever read.” ~ Kara, Goodreads“So. Darn. Clever. It’ll keep you on your toes until the final pages.” ~ Pages & Paws“Just when I think the series cannot get any better, it does. It's absolutely magical! I could not put this book down!” ~ Goodreads.   (Summary via Goodreads)

I am never disappointed when I open one of the books in the Destiny Falls Mystery & Magic series by Elizabeth Pantley.....and neither will you.

The Destiny Falls Mystery & Magic series follows main character Hayden Caldwell and her adorable cat Latifa after they mysteriously fall through a magical mirror.  They were living in Seattle with her grandmother and great-grandmother and she had a nice job working with her best friend.  However, all that changed one day when she was looking through her mirror and it ended up pulling her through to Destiny Falls where she had a whole other family she didn't know she had.  Yes she knew she had an older brother and her father but thought that they had abandoned her.....but after falling through the mirror she learns that her father and brother were pulled back by the family magic.  In Destiny Falls Hayden reunites with her father and brother and is introduced to her grandparents, half-sisters, half-brother and a whole new life  !!  Unfortunately one other main factor in this series is that murder is always nearby and Hayden always gets in the middle of it.

In Old Bones and Ice Cream Cones, the sixth book in the series, Hayden and her boyfriend are on a hike when they come across a boat with old bones in it.  It is learned that the bones are over 30 years old and this sets Hayden on a research mission to solve the mystery.  Unfortunately this is not the only mystery that Hayden has to worry about.  Her boyfriend Han mysteriously vanishes and when he returns, he is bigger and sexier and has no recollection as to where he was or for how long.  They soon learn that he is being pulled to the dark island, Gladstone, and Hayden has to obtain a magic potion and she has to travel to Gladstone to give to Han to drink......easy peasy.

Readers will instantly get drawn into this series and never want to leave !!  Reading this series you will be whisked away to this magical town of Destiny Falls and as you read, the town and everything in it will open your imagination wide open !!  You will feel like you are right there along side Hayden and you will not want to leave....even if it is scary at times.  I cannot stress enough how magical these books are and how quickly you will become a fan.  Having just finished reading Old Bones and Ice Cream Cones I am already missing Destiny Falls and cannot wait until the next book so that I can visit again !!