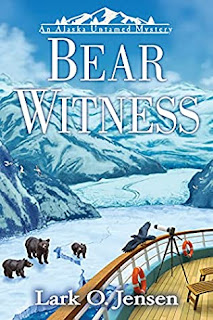 Alaska tour boat guide Stacie Calder faces the deep freeze in this scenic cozy series debut perfect for fans of Paige Shelton.No nine-to-five cubicle career will suit Stacie Calder—the naturalist much prefers working in the great outdoors. Specifically, the spacious and spectacular Alaskan wilderness, whose rugged charms she shares with sightseers on the top deck of the tour boat where she works. But one May afternoon, Stacie’s passengers see more than glittering glaciers, frolicking harbor seals, climbing bears and soaring seabirds…they also witness a man lying dead in the frigid Alaskan waters. And it seems likely that someone gave him a fatal push.Stacie didn’t know the unfortunate victim, but he sure wanted to know a lot about her. He spent most of his final afternoon bombarding her with questions quite awkward to answer. And when he wasn’t in her hair, he was arguing incessantly with the boat’s beleaguered crew. Which makes for a suspect list about as long as the passenger manifest. Furthermore, as police helicopters relentlessly circle her boat in search of any clues, Stacie is shaken to find herself on that suspect list.Before the tour boat reaches shore Stacie—accompanied by her beautiful blue-eyed husky, Sasha—must deduce just who sent the testy tourist tumbling into the turgid waters and have the authorities take custody. Because if she can’t, then the killer might aim a fatal ice-cold stare at Stacie.  (Summary via Goodreads)

What fun !!!  Bear Witness, the first book in the Alaska Untamed Mystery series by Lark O. Jensen is a lot of fun to read.....just make sure you're dressed appropriately because you are going to be spending a lot of time on a boat in Alaska !!

In Bear Witness readers are introduced to main character Stacie Calder and her husky dog, Sasha, as they are both working on an Alaskan tour boat pointing out the wildlife they see along the journey.   Stacie really enjoys her job as head tour guide working on the Clem Tours especially because Sasha is allowed to accompany her when she goes to work.  Stacie feels that her and her co-workers are a tight "family" and she would do anything to protect them.....little does she know that after a regular tour out to see the wildlife and glaciers in Tracy Arm everyone will see how far she will go to prove that.

While on one of the tours Stacie meets Sheldon Truit who continually asks question after question regarding the tour and everything about it.  She soon learns that he is well known with the Captain of the ship, Palmer, and not in a good way.  Things go downhill rapidly when at the end of the tour that day, Truit is no where to be found.  The local police are called and their special unit, Initial Response Section, of the Alaska State Troopers, come on board to look into his disappearance.  And Stacie is drawn to Trooper Liam Amaruq immediately.  The two end up working closely on the case when the next day while out on another tour, Truit's body is found washed up on shore.

Liam begins taking the tours on a daily basis so that he can observe the crew as well as ask questions.  He enlists Stacie's help as well to get another viewpoint and maybe her co-workers will tell her something important that they wouldn't tell the police.

As Stacie and Liam look into the case, they are spending a lot of time together and it is no surprise that they develop feelings for each other.  As well as reading about the murder case, readers will enjoy reading about their budding relationship.

Jensen has developed a great beginning to the Alaska Untamed Mystery series and I cannot wait to see where the series goes from here.  I highly recommend grabbing your copy and getting onboard so that you don't miss anything !!!