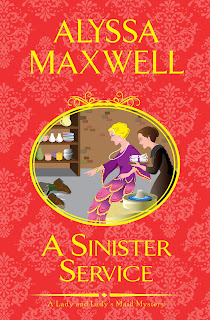 A trip to Staffordshire for Lady Phoebe Renshaw and her lady’s maid, Eva Huntford, leads to murder in a famed pottery works...Following the devastation of the Great War, England's noble class takes comfort in honoring tradition. To celebrate their grandparents' wedding anniversary, Lady Phoebe Renshaw and her siblings travel to Staffordshire to commission a china service bearing the Wroxly coat of arms from the venerated Crown Lily Potteries, a favorite of Queen Mary.The two leading designers at the illustrious china manufacturer offer competing patterns. But when one of them is found dead—his body crushed in a grinding pan and his design pattern book missing—his rival is immediately suspected. The police are also suspicious of the dead designer's resentful young son, a schoolmate of Phoebe's fifteen-year-old brother Fox. When Fox gets involved to help his friend, Phoebe begins to investigate the rival artist.At the same time, Eva is enlisted to go undercover at the works so she can gain the confidence of the female employees, who are only allowed to paint, not design, which may have led to a grudge against the victim. Pursuing a killer who has no compunction about using a kiln as a coffin, Phoebe and Eva take their lives into their hands to discover the shattering truth . . .   (Summary via Goodreads)

I LOVE traveling back in time with Alyssa Maxwell as my tour guide, interpreter, and voice for the characters.  The books in her series always grab your attention immediately and you are taken back in time to a simpler time that always has some murder and mayhem involved.

In A Sinister Service, the sixth book in Maxwell's A Lady & Lady's Maid Mystery series, main characters Phoebe and Eva, Phoebe's lady's maid are leaving Foxwood Hall and traveling to Staffordshire.  They are traveling with Phoebe's older sister Julia with her lady's maid, Hetta, as well are younger siblings, Amelia and Fox.  They are going to be staying at Lyndale Park, the estate of Lady Julia's late husband.  Unfortunately they do not know if Julia owns the property yet as her late husband's will has not been read yet and will not be read until Julia gives birth to the child she conceived on their wedding night shortly before he was murdered....but that is another book and story that hopefully you have read already.

Okay back to A Sinister Service.... the siblings are in Staffordshire to visit one of the many china making factories, Crown Lily Potteries, to discuss designing a china pattern and order china for their grandparents upcoming anniversary.

While at Crown Lily Potteries receiving a tour of the factory, the group comes across an old school mate of Fox's.  Trent Mercer had been taken out of the school that he attended with Fox to go work with his father at Crown Lily.  His father is head of the design department and designs a lot of the patterns for the company and wants Trent to follow in his footsteps so he was working at the factory and learning the business.

Unfortunately when the siblings return to the factory for a second meeting to finalize their custom order, Mr. Mercer does not show up for their meeting.  Soon after they find out the reason for his absence....he was murdered in another part of the factory.  And the bad news doesn't end there....Trent is arrested for his dad's murder.

Fox insists that his friend is innocent and Phoebe and Eva are inclined to agree, however, they need proof in order to make the police look elsewhere.  So Eva kind of goes undercover in the painting department pretending that she may be looking to leave her job as a lady's maid and work in a factory.  Phoebe also does her part by questioning anyone that will give her time.....but as they get closer to the truth, they put themselves right in the line of danger and they may not be able to save themselves in time !!!

Maxwell grabs your attention immediately and you will feel like you are standing along side the duo as they investigate this new murder and try to prove Trent's innocence.  You cannot help but turn the pages as fast as you can so that you can see what happens at every turn.  Once you read one of the books in the A Lady & Lady's Maid Mystery series, you will be a fan for life .... I guarantee it !!