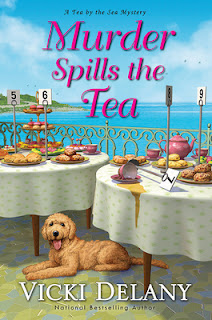 The country's hottest TV cooking show is coming to Cape Cod. And against her better judgment, Lily Roberts is entering America Bakes! with her charming tearoom, Tea by the Sea! Filming is already proving disruptive, closing the tearoom during Lily's busiest season. But tensions really bubble over when infamous bad-boy chef and celebrity judge, Tommy Greene, loses his temper with Lily's staff, resulting in an on-camera blowout with Cheryl Wainwright. Just as Lily thinks the competition can't get more bitter, Tommy is found dead in Tea by the Sea's kitchen . . . murdered with Lily's rolling pin.Suspicion immediately falls on Cheryl, but the temperamental star has racked up plenty of culinary clashes in the past, both on- and off-screen. And nearly anyone associated with Tommy or the show could be the killer: be it one of Lily's fierce competitors, a member of the beleaguered film crew, or even one of Tommy's fellow judges--struggling cookbook maven, Claudia D'Angelo or beauty contest winner, Scarlet McIntosh. Now, while she's baking up a storm for the show, Lily must also whip up an impromptu investigation . . . before the murderer rolls someone else away.  (Summary via Goodreads)

Murder Spills the Tea by Vicki Delany is full of likely suspects.... as you get deeper into the story, your list will continue to grow.

Murder Spills the Tea is the third book in Delany's Tea by the Sea Mystery series and even though this is the first book in this series that I have read, I was completely hooked immediately.  Murder Spills the Tea reads like a stand alone book and readers will be captivated instantly.

In Murder Spills the Tea Lily Roberts who runs the Tea by the Sea tearoom and her grandmother Rose who owns and runs the Victoria-on-Sea bed and breakfast are getting ready to host members of the baking reality television show America Bakes!.  They are both excited and nervous as Lily is also competing on the show against a bakery in town.  Some of the members of the cast and crew will be staying at the Victoria-on-Sea.

Unfortunately the first day of taping the show, one of the judges, Tommy, causes a scene tripping one of the waitresses, Marybeth, at the tearoom and her mother, Cheryl, who also works there has some words with Tommy even threatening him.....and it's all on tape !!!  And when Tommy ends up dead the next morning, it doesn't take long for the detectives to take Cheryl in for questioning.

Lily and her friend and neighbor, Bernie, cannot stop thinking about the murder and want to prove Cheryl's innocence but that might not be easy.  After talking to the other judges and members of the crew of America Bakes!, they cannot be sure of anyone's innocence or guilt.  They want to believe that it was someone from the cast and crew or an outsider all together, unfortunately there are residents in town that could also have done the deed.

Lily just wants everyone associated with America Bakes!  to leave and move on to their next segment and leave everyone alone in Cape Cod.....but the show is in limbo while the higher ups decide if they want to continue filming this episode.  Lily decides that she is going to stay out of the investigation .... that is until the gardener for the bed and breakfast is attacked !  Lily devises a plan and thinks she knows who the guilty party is, she just has to stay safe and alive long enough to tell Detective Redmond.....

Readers will want to jump inside Murder Spills the Tea and reserve a room at Victoria-on-Sea and stay there as long as they can...even if there is a murderer roaming around town.  Delany's expertly written words will have your imagination opening up so wide that you will feel like you are right there along side everyone in the tearoom and you will wish you could partake in the tea and goodies !!!!