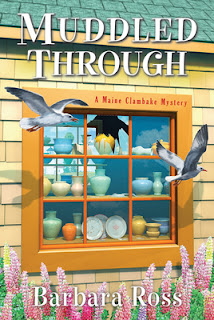 Mud season takes on a whole new meaning in the coastal town of Busman's Harbor, Maine, when local business owners sling dirt at one another in a heated feud over a proposed pedestrian mall. Vandalism is one thing, but murder means Julia Snowden of the Snowden Family Clambake steps in to clean up the case . . .When Julia spots police cars in front of Lupine Design, she races over. Her sister Livvie works there as a potter. Livvie is unharmed but surrounded by smashed up pottery. The police find the owner Zoey Butterfield digging clay by a nearby bay, but she has no idea who would target her store. Zoey is a vocal advocate for turning four blocks of Main Street into a pedestrian mall on summer weekends. Other shop owners, including her next-door neighbor, are vehemently opposed. Could a small-town fight provoke such destruction? When a murder follows the break-in, it's up to Julia to dig through the secrets and lies to uncover the truth . . .   (Summary via Goodreads)

Muddled Through is the tenth book in the Maine Clambake Mystery series by Barbara Ross and the books just get better and better as you get deeper into the series.

In Muddled Through it is springtime in Busman's Harbor which means it is down time for most of the residents and businesses.  That is all but a few included a fairly new business, Lupine Designs.  Main character Julia Snowden's sister Livvie works at Lupine Designs in the offseason when the Snowden Family Clambake is closed.  Julia and her ex-boyfriend Chris use to live above Gus's restaurant and in the offseason they would run it so Gus could have time off......unfortunately this is the first year that they are not doing that as Julia broke up with Chris and Gus needed the studio apartment above the restaurant for family so Julia is back living in her old bedroom in the family house residing with her mom.

There are some changes occurring in Busman's Harbor and one of the things that the townspeople cannot agree on is a pedestrian mall that will run during the summer on weekends.  Some people are adamant about not having the pedestrian mall and are very vocal at a town meeting.  After the town meeting Lupine Designs is vandalized and fingers are pointed towards Phinney Hardison seeing as his business is in the same building and they share the basement.....and there is no secret that Phinney and Zoey, the owner of Lupine Designs do not get along.....and when he is found murdered in the middle of the night in the shared basement, the only suspect the police are looking at is Zoey.

When Livvie askis Julia to help prove Zoey's innocence, she has no idea what that entails.  As Julia gets to know Zoey, she realizes that she likes her and can see them as becoming close friends....but is Zoey guilty with keeping secrets like Chris was ......

Julia has no idea that Zoey's past plays a huge part in what is happening currently and as she digs in, she may just bury herself and Zoey......

Readers will LOVE this series !!!  The town of Busman's Harbor is one you will want to visit regularly.  You will love the people and the shops and the businesses.....you will have no problem overlooking the murders that occur because you know Julia will be looking into them and you know she won't stop until the guilty party is arrested !!!