Murder at the Wedding (Modern Midwife Mysteries, #1) by Christine Knapp 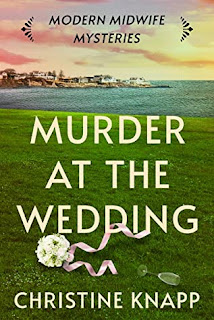 Birth, death, mayhem, and murder…..Maeve O’Reilly Kensington loves her job as a nurse-midwife at Creighton Memorial Hospital in the quintessential New England seaside town of Langford. Nothing could bring her more pleasure than helping women usher new life into the world... except possibly having a child of her own with her husband, Will. In the meantime, she's happy to celebrate the families of those she treats, and content to support her husband in his newly formed catering business.However when Creighton Memorial's Chief Obstetrician suddenly drops dead at his daughter’s extravagant wedding reception, catered by Will, Maeve's two worlds collide in the worst possible way. Suddenly murder is on the menu, and Maeve is desperate to help her husband and find out who killed the doctor.With the help of her wealthy, acerbic sister Meg and quick-witted Boston Irish mother, Maeve sets out to solve a murder and clear her husband's name. Can she stay one step ahead of the killer? Or will they strike again... this time closer to home?   (Summary via Goodreads)

Main character Maeve O'Reilly Kensington  has her hands full and then some in Murder at the Wedding by Christine Knapp.  Murder at the Wedding is the first book in Knapp's Modern Midwife Mystery series and it is so full of great people and interesting storylines that you will breeze through reading it.

In Murder at the Wedding, as the title suggests Maeve is attending the wedding of the daughter of the Chief Obstetrician at the hospital that Maeve works as a midwife.  Not only are there a lot of important people attending this wedding but Maeve's husband, Will, is catering the event.  Sadly the wedding doesn't go as planned for anyone, except maybe the killer, when Dr. Whitaker drops dead after giving a toast.  This unfortunately adds a lot of stress to Maeve as her husband is losing scheduled events after word gets out that he catered the event where someone died and there are a lot of changes happening at the hospital that affect Maeve, her co-workers and her midwife department.

Even though Maeve's brother Patrick is a police officer Maeve and her sister Meg decide to do some investigating of their own......even though Maeve has other things she should be worried about and focusing on....like working on getting pregnant or starting fertility measures.....

The sisters are drawn in more when Will doesn't receive payment for the wedding and someone else in the Whitaker family is attacked and things start escalating at the hospital and Maeve's department.  The two sisters cannot sit by and allow things to continue without trying to solve the murder.

Readers will fall in love with this series immediately !!  You cannot help by love Maeve and her family, her job and the department and Will and even his stuffy family.  You will love the dynamics and the structure of the hospital and the families and the relationships among everyone are great as well.  There is nowhere else you would rather be then hanging with Maeve.  Also at the beginning of every chapter Knapp provides a little tidbit of information regarding pregnancy and midwife procedures that you may go away learning something as well.

I highly encourage and suggest you grab your copy of Murder at the Wedding and getting lost for a while.