Christmas in the Cotswolds. Three wise women. Two furry friends. One dead body. Will they unwrap the killer?  Or become the latest victims? 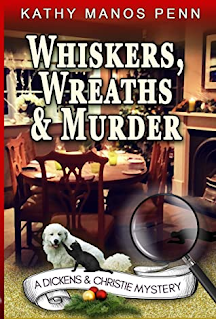 Leta and her friends are busy preparing for the Tree Lighting on the Village Green. The children hang ornaments, the choir sings, and the Earl of Stow flips the switch to set the tree ablaze with lights.

What could go wrong?

Plenty when there’s a new Earl in town. The beloved elderly Earl passed away months ago, and his American grandson has arrived to claim his title and inheritance. And he has plans—big plans.

The village is rife with rumors about the goings-on at Astonbury Manor.

Add a tragic accident and a grieving family—and the season is off to a rocky start. Can the village pull together to chase away the dark mood? Only if the mystery surrounding the accident can be solved.

Leave it to the Little Old Ladies’ Detective Agency and their four-legged sidekicks Dickens & Christie. Fresh off investigating a murder at the Fall Fête, they’re once again on the case.  (Summary via Amazon)

A cat and a dog that can communicate with their owner.....what animal lover doesn't want that ?  And if you're a pet owner, you totally want that !!  Well Leta Petkas Parker has that !  Leta's dog Dickens and her cat Christie talk to her and she completely understands them and talks back.  Leta also has the ability to talk to other dogs and cats as well.

Leta, Dickens and Christie live in the Cotswolds in England having moved there recently after Leta lost her husband Henry and she retired in the US.  Even though they have only lived there for a short time they have made quite a few friends and are adapting well.

In Whiskers, Wreaths & Murder Leta is getting ready to enjoy her first Christmas in her new home with her new friends.  There is a lot going on and everyone is in the Christmas spirit.....and they are going to a big party at the Astonbury Manor to celebrate the birthday of the Dowager Countess.  Leta knows the Dowager Countess, Ellie, from book club and she is excited to meet the rest of the royal family.  Unfortunately there is a lot of bad talk around the family. The newly appointed Earl, Nicholas, is talking about turning the Manor and grounds into a resort which will affect the family in a lot of ways.  Nicholas and his wife, Julia, are from the states and only come to Cotswold a few times a year whereas Ellie, her son and daughter-in-law, and nephews live at the Manor and use the grounds for business.

The morning after the birthday party Leta and her friend Peter are on a bicycle ride and come across a car that went off the road.  When they get to the car they see that it is Nicholas and he is still alive.  Unfortunately he dies a short time later and it appears that it was no accident that his car went off the road.

Leta has butted heads with Gemma, the Detective Sergeant in the past when she and her friend Wendy and Wendy's mother, Belle, have investigated a few murders in the past but when Gemma outrights asks them to help everything changes.  Gemma has to go out of town for a week right after the murder happpens and she asks the "Little Old Ladies Detective Agency" to be her eyes and ears while she is out of town.  Of course we know these ladies and know that they will jump right in and uncover the truth.

Whiskers, Wreaths & Murder is the third book in the Dickens & Christie Mystery series by Kathy Manos Penn and I hope that you are a fan as well.  If you aren't a fan, maybe you will be after this.  There is so much to enjoy while reading this series.  Penn makes it as easy and enjoyable as she can.....she starts off by providing readers with a list of characters at the beginning of each book so that you won't get confused or lost.  And Dickens and Christie are always keeping Leta on her toes and they will do the same for the readers.  And again....who doesn't wish they could talk to animals ??  And the fun that Leta has keeping it from her friends will have readers laughing out loud !!