Sergeant Winston Windflower and his trusty crew at the Grand Bank detachment of the Royal Canadian Mounted Police have more than a few mysteries on their hands. Windflower suspects that the three cases—a homicide, a near-homicide and a fire on Coronation Street—are somehow connected, but how is proving difficult to determine, especially now that he must battle his unusually cranky mood, the never-ending winter that has gripped the coastal region of Newfoundland and his new, power-hungry boss.In Fire, Fog and Water, award-winning author Mike Martin is true to form, retaining the light crime genre for which he is known while delving into the most perplexing social issues of our time, including mental health, addictions and workplace harassment. Windflower must not only solve the drug-and-death crimes that threaten the otherwise tranquil lives of Grand Bank’s residents, he must resolve his own internal conflicts before they consume him as surely as the blaze that engulfed the house on Coronation Street.  (Summary via Goodreads) 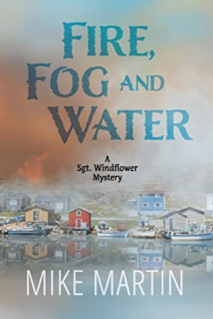 The only thing you won't like about the Sgt. Windflower Mysteries is the weather.....but that's okay, the characters in the book don't like it very much either.

I have had the pleasure of reading all the books in this series and I can honestly say that I am a HUGE fan of the series and author Mike Martin.  Now when I open one of the books, it's more than just reading a books, it's taking a vacation and visiting with family and friends.... and with every new book in the series you grow with them.

As with the other books in this series, Windflower has a lot going on with work...being in charge of the Grand Bank detachment of the RCMP (Royal Canadian Mounted Police) is a job he takes very seriously.  Keeping his town and people safe is what he lives for.  However, his wife, Sheila and their daughter, Amelia Louise, is what he breathes for.

In Fire, Fog and Water while out for a run on a trail with his dog Lady, Windflower stumbles, falls and lands next to a rolled up carpet with a dead body in it.  This will take him and his employees down a twisted road involving drugs, more death, fire and bad decisions.  All of this is nothing that Windflower and his detachment cannot handle but when a huge problem develops within the RCMP involving Tizzard and his fiance Carrie Evanchuk, this may be the straw that breaks the camels back !!!

I have probably said this before but it rings true with every book I read in this series but I can sit and read about Windflower shuffling paperwork around at work and going home to his wife, daughter and pets and having dinner and walking around town.  I don't need all the excitement that the RCMP brings to the table.....don't get me wrong, I'm not going to turn away when reading about it.  It's just that the way Martin writes allowing your mind to open, you can see everything clearer than some of Windflowers dreams.  And the picture you see is one you will want to hold on to as long as you can.......