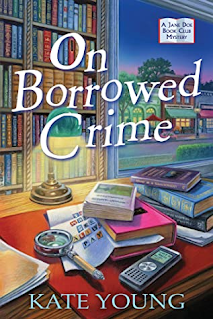 The Jane Doe book club enjoys guessing whodunit, but when murder happens in their midst, they discover solving crimes isn't fun and games...

Lyla Moody loves her sleepy little town of Sweet Mountain, Georgia. She likes her job as receptionist for her uncle's private investigative firm, her fellow true crime obsessed Jane Doe members are the friends she's always wanted, and her parents just celebrated their fiftieth wedding anniversary. But recently, with her best friend Melanie on vacation, and her ex-boyfriend and horrible cousin becoming an item and moving in next door to her, her idyllic life is on the fritz. The cherry on top of it all is finding Carol, a member of the club, dead and shoved into a suitcase, left at Lyla's front door.

Unusual circumstances notwithstanding, with Carol's heart condition, the coroner rules Carol's death undetermined. But when they discover the suitcase belongs to Melanie, who had returned from her vacation the following morning, Sweet Mountain police begin to suspect Lyla's best friend. Determined that police are following the wrong trail, to clear her friend's name, and to not allow Carol to become one of the club's studied cold cases, Lyla begins to seek out the real killer. That is, until she becomes the one sought after. Now, finding the truth could turn her into the killer's next plot twist, unless she wins the game of cat and mouse.   (Summary via Goodreads)

The first book in the Jane Doe Book Club Mystery series, On Borrowed Crime, by Kate Young is EXPLOSIVE !!  Young sets the stage beautifully for this series and she leaves the reader wanting more !!

Lyla Moody seems to have her life in order.  She lives in a townhouse right next door to her best friend Melanie.  She is working towards her dream job....currently working as a receptionist for her uncle Calvin who owns Cousins Investigative Services.....but really wants to be a partner and help solve crimes.  She belongs to a book club, The Jane Doe Book Club and obviously they read murder mysteries and talk about them in length.  She has loving if not overprotective parents and her Gran and her have a solid relationship.

Lyla's life is heading in the direction that she wants until she returns home and finds a suitcase at her front door and her ex-boyfriend and her not so nice cousin moving in practically next door.  Lyla thinks that the suitcase belongs to Melanie because Melanie is on her way home from vacation and her luggage went missing.  Unfortunately when they open the suitcase the next morning, they find the body of one of the Jane Doe Book Club ladies, Carol Timms.  Carol was a huge fan of Jane Doe cases and had recently forwarded some cases and a map of a stretch of road not far from where they live that was the dumping grounds for some bodies.  Carol's husband, Judge David Timms, hires Lyla's uncle to find out who killed Carol and with him out of town in Atlanta working a case, Calvin allows Lyla to do some work on the case as long as she's careful.

As Lyla looks into Carol's recent behavior, she finds out that Carol was a patient of her father's (he is a psychologist) and was dealing with a lot of paranoia.  Lyla tries to keep a level head while working the case however when Melanie is questioned and then Kevin (her ex-boyfriend living next door) gets arrested, she begins to wonder if the police are doing their job or just looking for the first person they can blame the murder on.  Lyla, unfortunately also dated the Chief of Police before and they never resolved their issues so Lyla can't help but wonder about him.....and the is Judge pushing to solve his wife's murder which adds to her concern.

I would love to keep writing about On Borrowed Crime and tell you every juicy detail but that wouldn't be any fun for you.  I highly recommend getting a copy of this book and going to a quiet corner and settling in.  I will tell you this......you will get to a point in the story that you will be powerless to stop reading.  You will have to keep reading to see how things end or get resolved.  I was thoroughly engrossed in this book and cannot wait until the second book comes out so I can see what trouble Lyla has to face.