Only Raven knows her missing and estranged husband is, in fact, dead. She knows because she killed him. Another murdered body has landed at her feet, and she must uncover the killer before the police investigation stumbles across her crime. Raven cannot allow her significant disability to interfere but must use it to her advantage before her prey turns the tables.  (Summary via Goodreads) 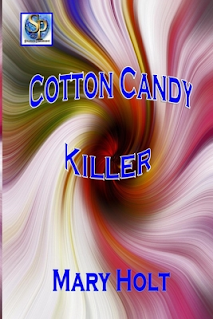 Cotton Candy Killer by Mary Holt is the second book in the Raven series.  In the first book in this series, Reclaiming Raven, the only way Raven can get out of an abusive marriage is by killing her husband Cole.  Unfortunately Cole's death will continue to follow and haunt Raven.

Raven is handicapped, partially paralyzed, and her friend, Kelsey, who was hit by a car driven by Cole will never be the same.  They are trying to pick up the pieces of their lives in Cotton Candy Killer and move forward in life.  Raven has a service dog Millie that helps her move around, she lives with Isaac, a gay ex-police officer, and she is friends with Lydia, Isaac's sister.  Raven use to work at the funeral home for Lydia but seeing as that is the place she fought for her life against Cole and killed him there, she does not want to ever step foot in there again.

In Cotton Candy Killer Raven works for Kelsey who is a social worker.  Kelsey has Raven doing a lot of different sensitivity training exercises so that she can better understand life and those around her.  Raven does not like doing any of them and you will see these throughout the story.  Kelsey also claims to be a pet psychic and has conversations with Millie and has a house full of animal spirits.

While visiting with Kelsey at her office a waterlogged woman comes in looking for help.  She says she was on the ferry and was pushed off and she needs protection.  After finding out the woman's name, Kelsey doesn't know if they are capable of helping the woman.  The woman is the widow of a very powerful and important judge and her daughter is following in his footsteps.  Kelsey and Raven try to encourage her to seek legal help but she fears that whoever tried to kill her did so because her daughter told them to do it.

When Raven goes to work at the Georgetown Information Center to finish getting things ready for the summer festival, her and Millie find a dead body stuck in the cotton candy machine.  She is unable to see who it is because the head is covered in cotton candy but after the police show up and identify her, it turns out to be Eileen Edgewater, the woman looking for help at Kelsey's office.

To make matters worse, the detective assigned to previous situations involving Raven and her husband, is on this case and won't let up on Raven thinking she was the one who killed Eileen.  Then Raven loses her job which lands her working for Kelsey.

When Eileen's best friend Beth comes to her looking for her help as well, Raven cannot turn her away fearing for her life.  This will lead Raven and Millie down a dangerous road and she is going to take everyone on the ride with her.....

Cotton Candy Killer is a non-stop joy ride.  Readers will be on the edge of their seats at times and a few pages later they will find themselves laughing out loud at some of the sensitivity training antics that Raven has to go through.  And when readers get to a certain part of the book, they will be powerless to stop reading..... Holt will have taken that ability away from you.  So grab a snack and a drink, your comfy blanket and settle back on your couch and get ready for a nail biting, can't stop reading tale......