When her former director is found dead in the water, librarian Lucy Richardson will have to get to the bottom of the mystery before the killer ends her tale. It's summertime in the Outer Banks of North Carolina and Bertie James's college class is having their 40th anniversary reunion. The opening night reception is held at the Lighthouse Library and Lucy and her colleagues have assembled an exhibit of library artifacts showing how libraries have changed over the years. After the reception, some of the women take a walk down the boardwalk to the pier, using flashlights to illuminate the dark path, but what's scarier than the dark is finding the former director of the Lighthouse Library floating lifeless in the water.Helena Sanchez, the former director, wasn't much loved and spent the party being rude to almost everyone there. As a result, Lucy finds herself in deep water as she rocks the boat, questioning several suspects. But she'll have to batten down the hatches and fast before she's left high and dry...and right in the killer's crosshairs.  (Summary via Goodreads) 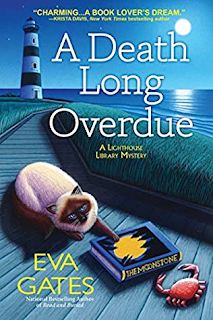 A Death Long Overdue by Eva Gates is the seventh book in the Lighthouse Library Mystery series and after reading any of the books in this series, you will want to live in a lighthouse.

Main character Lucy Richardson is lucky in that she lives on the top floor of a lighthouse and she works in the library that is on the three lower levels in the lighthouse.  She lives in Nags Head in the Outer Banks of North Carolina where her aunt and uncle and cousin live and where she spent her summers when she was younger.  She is also dating the Mayor of Nags Head and she takes care of the library cat, Charles.....and she somehow gets in the middle of murder cases in the area and helps the police solve them.

In A Death Long Overdue Lucy and her co-workers are getting the library ready for a fortieth reunion of the first day of undergrad studies for their boss, Bertie, and her classmates.  They have planned an entire weekend of events with it kicking off at the lighthouse library with drinks and snacks and they are unveiling a display of items showing the history of libraries.  Besides members of her undergrad class Bertie decided to invite Helena who was the library director before she took it over and who she found out was going to be in the area during the weekend.  Unfortunately after some of the group decided to take a walk through the marsh and down the boardwalk by the library at the end of the welcome event, Helena, ends up floating in the water.  It is soon concluded that she was murdered but who would have killed her ? No one really knew her and those that did hadn't seen her in years.....

No matter how much Lucy protests she ends up getting involved in the investigation.  And when an old book that was taken out of circulation years ago but Lucy brought back to the library to show the old way of keeping track of who took the book out and when, ends up missing, a cold case is brought into the mix.  It seems that years ago an expensive necklace was stolen from a house during a wild party and the person rumored to have stolen it, also took out this book around the same time and when Helena looked at the book during the party she showed emotion when she read his name..... this leads Lucy to look into that case as well as try to find out who killed Helena.  Could the two cases somehow be connected ??  Well if they are, readers know that Lucy will be able to figure it all out !!!

The Lighthouse Library Mystery series will give you goosebumps !!!  In this seventh book readers will experience good and spooky goosebumps !!  If you are a fan of this series, I don't have to say much to convince you to continue reading it.  However if you haven't read any of the books in this series, I highly encourage you to start !!  Once you open a book in this series, Gates will open your imagination and you will feel like you are right there in the lighthouse...... you will develop a clear picture of what it all looks like .....just don't read the Author's Note in the back where she admits that the real Bodie Island Lighthouse isn't big enough to house everything she writes about......let the image in your mind stay the way you imagined !!!