Murder for Reel (An Usherette Mystery) by Matt Ferraz 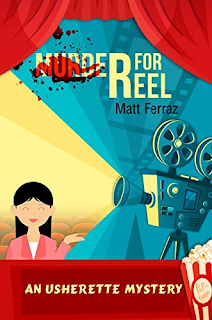 In the late 1950s, the Palladium Movie Theater was the most popular place in Emberview, Colorado. In her first night working as an usherette at the Palladium, young Katrina Stevens is excited to be starting her dream job. During the screening of a science-fiction film, her boss and owner of the theater, Don Keller, is found murdered in the projection booth. Don’s murder causes an uproar and soon the Palladium is facing closure. To support the theater, Katrina organizes a film festival to show old movies from reels that Don kept in storage. However, Don’s murderer has other plans, and unless Katrina can find out who the killer is, the Palladium––and Katrina herself––are in great danger.  (Summary via Amazon)
Murder for Reel centers around a movie theatre,in a small town Emberview, Colorado, a young girls first job as an usherette and her love for the cinema.  All innocent things.....one would think.

In Murder for Reel Katrina Stevens is starting her first day as usherette for her town's movie theatre, the Palladium.  It is 1957 and during those days, cinemas had a young person dressed in a uniform and flashlight making sure movie goers were being quiet and respectful of others while the movies played.  Katrina had longed for this job for years and couldn't believe that she was finally wearing the uniform and getting a pep talk from her boss, Don Keller.  Little did either one of them know that that was going to be the last time Don spoke to anyone.

Don was the owner of the Palladium for over 30 years and he sat in the projector booth working the movie reels.  Back in those days, the movies came in multiple reels and it was crucial for the projector operator to pay attention and change the reel at the exact moment so that the movie didn't have a gap.

During the first movie of Katrina's first day on the job, something goes wrong when the final reel of the movie doesn't start and the audience is left looking at a blank screen.  Before Katrina can calm the audience down, another co-worker, Cindy, runs into the theatre with blood on her hands saying that Don is dead !!

Katrina fell in love with the Palladium at an early age and now that she was a part of it, she didn't want to lose it.  So she decides to find out who killed Don and why.  Unfortunately Don had a dark past that started years ago when he was in Hollywood and a long time secret he takes to the grave.......or maybe not......

I am a huge fan of Ferraz and was very honored when I got to page 12 and read "police inspector Stockwell" and when asked Ferraz said it was a tribute to me.  Thank you Matt and as I have said before....anything you write, I will read.  And I will continue to encourage others to read your work !!!


Grab your copy at :   https://www.amazon.com/dp/B08LYP9XRW?fbclid=IwAR0zLLopCYSrnan0iYeu6YzPLyAqMBg83ueXoVSnDWFbgIQSkBx5Pzt4W7A