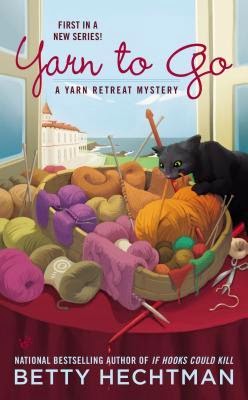 Casey Feldstein isn't really the kind of girl that sticks to anything. Medical school, law school, working in a PI office, they all only lasted a short time. Now she's a dessert chef, living in the guest house of her Aunt Joan's house. However, when Joan is accidentally killed in a car accident, she must also add something else to her list - running a yarn retreat! Joan ran "Petite Retreats", fun weekend-long yarn retreats, and she had one all booked and now Casey must step in. She's not a knitter, but she does her best to honour her aunt's memory. With a dark cloud already over the weekend, especially with the accidental death of a knitter at the last retreat, Casey must not just step in, but also turn her hand at solving a crime too when one of the knitters if found dead.

I'm a knitter and a crocheter and I love reading mysteries that centre around yarn. This mystery was fun in many ways, but mostly it was fun seeing my favourite hobby through Casey's eyes, being that of a newbie. All the abbreviations and code names that I take for granted, like my "stash", ie. my yarn stash, are new to her. She soon learns a lot more than she ever though she wanted to know about yarn.

There are two deaths that have occurred even before I got into the first chapter. Those being Casey's aunt and Amanda Proctor, a knitter that died at the end of the last retreat. As they say accidents go in threes, and soon another dead body is added to the list. I guessed early on who the killer was and the motive behind it. This didn't take anything away from my enjoyment of the mystery at all. I really liked Casey and the other ladies and gents (yes even men knit!) who attend the retreat, and it was fun to experience the yarn retreat with them.

Yarn to Go was a very fun first-in-a-new-series for me. I enjoyed this small town of Cadbury by the Sea. With Casey's love of baking and her growing interest in knitting, I know this is one series I will be keeping up with.
Posted by Anna at 09:39